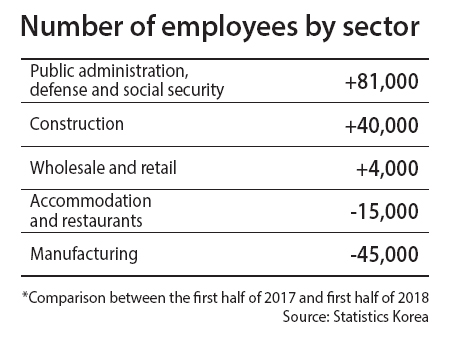 Jobs in the public sector rose solidly in the first half of this year, as promised by the Moon Jae-in administration.

But the number of workers on the bottom rung rose the most - by the largest margin in five years, according to data from Statistics Korea on Sunday.

Jobs in the public administration, defense and social security sectors increased by 81,000, or 7.7 percent, from 1,046,000 in the first half of 2017 to 1,127,000 in the first half of this year. That was the largest growth in five years. Those sectors include government institutions such as the National Assembly, central and local governments and law enforcement. Medical and education institutions are not included.

Of all employees in what is commonly dubbed as the public sector, those paid less than 2 million won ($1,783) a month made up 68.6 percent. Most of them are simple jobs such as janitors and security guards. The number of lowest-run jobs in public institutions rose 32,000 or 14.3 percent, in the first half of this year, compared to a year earlier.

In the private sector, the job environment is the exact opposite. New jobs are disappearing - particularly for workers on the lowest rung.

In that same period, the number of new manufacturing jobs for workers making less than 2 million won a month nose-dived a whopping 235,000, or 20.2 percent, presumably because of a higher minimum wage.

The data indicates that public sector has been propping the jobs figures - although unemployment hit 3.6 percent in September, the worst figure for the same month in 13 years - but the quality of jobs is sliding.

By status, full-time job holders in the public sector as of the first half rose 28,000 from a year earlier, whereas temporary workers in the same sector spiked 53,000 over the same period.

Still, the government appears to be keen on boosting the numbers for jobs no matter what kind they are.

The Ministry of Economy and Finance announced late last month it would generate 59,000 short-term, public jobs by the end of this year “to tackle unemployment situation.”

The jobs are for young people, those in their 50s and 60s and even older folk. Of the 59,000 new hires, 11,000 will be janitors at traditional markets and people monitoring traffic safety.

A sizable portion of the new jobs will last less than two months.

On the announcement, Kim Dong-yeon, deputy prime minister for the economy, was criticized for the government trying to increase the jobs figures with short-term jobs. He reacted in an unexpected manner.

“I would like to do anything to generate at least one more job,” he said. “The government isn’t supposed to be sitting still when the job market is in such a serious situation.”