Veteran movie actor Shin Sung-il dies at 81: Korea’s biggest heartthrob of the 1960s and ’70s had been battling lung cancer

Veteran movie actor Shin Sung-il dies at 81: Korea’s biggest heartthrob of the 1960s and ’70s had been battling lung cancer 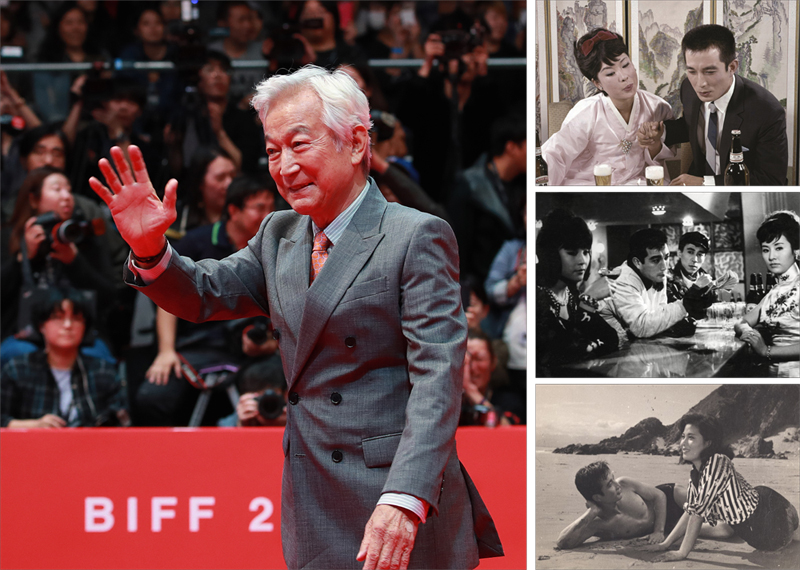 Clockwise from the left above; Actor Shin Sung-il poses on the red carpet at the opening ceremony of the 23rd Busan International Film Festival last month. The star of the Korean film’s golden age died of lung cancer on Sunday; Shin and actor Um Aing-ran, whom he married in 1964, pose together for Oriental Brewery’s 1965 promotional calendar; A scene from “The Barefooted Youth” (1964), which shot Shin to stardom; A scene featuring Shin and co-star Lee Min-ja in the 1962 romance movie “Only for You.” [YONHAP, JOONGANG ILBO, KOREAN FILM ARCHIVE]

Veteran actor Shin Sung-il, who was fighting lung cancer, died on Sunday at a hospital in North Jeolla. He was 81.

“Shin Sung-il, the honorary chairman of the Korea Film Actors Association [KFAA], passed away on Sunday morning at 2:30 a.m.,” announced KFAA. Shin served as the chairman of the KFAA from 2003 to 2005.

Shin, Korea’s biggest heartthrob during his heyday in the 1960s and ’70s, was diagnosed with stage-three lung cancer in June 2017. After the diagnosis, Shin moved to the countryside to rest and concentrate on chemotherapy.

Despite his illness, Shin refused to let go of his passion for cinema. While fighting lung cancer, he made appearances at various film events, including the opening ceremony of the 23rd Busan International Film Festival, held in October. He also showed up on various television shows. He was last seen in an episode of TV Chosun’s “Life Documentary, My Way,” which aired on Thursday. On the show, Shin appeared to be healthy.

Shin was also planning to attend the eighth Shin Young Kyun Arts and Culture Foundation Artists of the Year Awards, which will take place on Friday. He was to personally receive a lifetime achievement award.

Born in 1937 in Daegu, Shin was raised by a single mother who served as a civil worker. Shin was an excellent student and was a student in the Department of Korean Language and Literature at Konkuk University.

Though his real name is Kang Shin-yeong, the actor debuted in the entertainment industry as Shin Sung-il, a stage name given to him by the late director Shin Sang-ok. The actor made his first appearance in the filmmaker’s 1960 feature “Romantic Papa.” Thanks to his charming appearance and voice, he soon rose to stardom, backed by many female fans.

Shin stayed active through the 2000s, appearing in several films like “Door to Night” (2013) and “Typhoon” (2005). Over the course of his entire career, he starred in more than 500 films and received many awards, including the Best Actor at the Baeksang Arts Awards and the Favorite Film Actor award at the same ceremony more than five times. His titles were also recognized at other prestigious awards ceremonies such as the Daejong Film Awards and the Blue Dragon Awards.

In 1964, Shin married Um Aing-ran, with whom he co-starred in “The Barefooted Youth.” His marriage to Um, who was one of the most popular female actors of the time, generated lots of buzz and a crowd of 4,000 people formed outside their wedding.

The couple’s relationship, however, did not go smoothly, partly due to Shin’s extramarital affairs and their different lifestyles. Though the couple did not get divorced, the pair lived separately for many years.

In 1981, Shin jumped into the politics. He served as a member of the National Assembly in 2000, but was given a five-year prison sentence in 2005 for receiving bribes while in politics. He was granted a pardon in February 2007.

To commemorate his contributions to the film industry, KFAA is creating a funeral committee to hold Shin’s funeral. Specific details are currently being discussed with Shin’s surviving family - Um and the couple’s two daughters and son. The funeral is being held at the Asan Medical Center in Seoul, and the coffin will be borne out tomorrow.