Pro-choice activists see an opportunity for change: After the rise of the Me Too Movement, feminists have taken to the streets to make abortion legal

Pro-choice activists see an opportunity for change: After the rise of the Me Too Movement, feminists have taken to the streets to make abortion legal 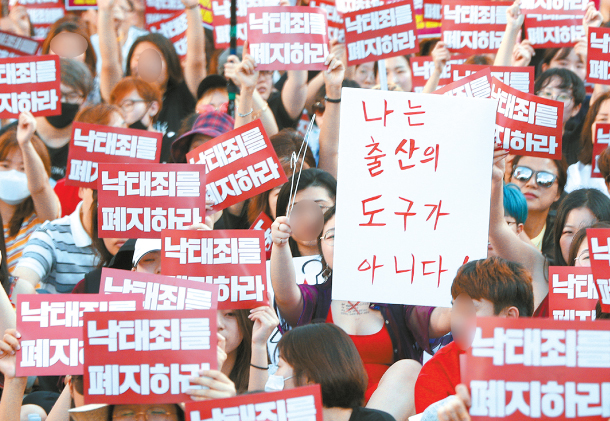 Safe Abortion - a collective of 16 feminist organizations - held a pro-choice rally on July 7 in Gwanghwamun, central Seoul. In the middle of the group of demonstrators, a participant holds up a hand-written sign reading, “I am not a means of childbirth.” [NEWS1]

On Jan. 23, 2017, police in Changwon, South Gyeongsang, got a call from an old couple reporting that their daughter - a woman in her 30s surnamed Kim (alias) - was missing. Police traced down Kim’s last call and found her dead inside her car in the Gyeonghwa-dong neighborhood. Laying beside her was burnt coal briquette - the cause of her death - and three pieces of paper containing her will. “My boyfriend doesn’t want a child, but I don’t have the courage to abort the baby,” wrote the woman, asking for her family’s forgiveness.

“A woman who induces her own miscarriage through the use of drugs or other means shall be punished by imprisonment for no more than one year or by a fine not exceeding two million won,” reads clause 1 of Article 269 of the Korean Criminal Act, which was amended in December 2016. Abortion is defined as a punishable crime in Korea, resulting in tragedies like Kim’s. Many such women are left with few good options to choose from.

Feminist voices have grown louder in recent years, especially since earlier this year, when waves of #MeToo revelations came to light. They opened the doors for more discussions touching various parts of female life, including the decades-long feud on abortion. People have long demanded the government allow women to go through the procedure without having to fear legal judgment, and after the Constitutional Court named its final three judges on Oct. 18 to complete the 9-member system, feminist organizations are readying themselves for a fight.

Abortion was deemed illegal when the Criminal Act went into effect in 1953. In 1973, the Mother and Child Health Act allowed limited permission for induced abortion operations under Article 14 for two reasons: disease or rape. Only when the mother or the father suffers from “any eugenic or genetic mental disability or physical disease” or the woman is “impregnated by rape or quasi-rape” is an abortion legal, even to this day.

But these are not the only circumstances under which people feel the need to abort their pregnancies. In fact, the most common motifs come from other socio-cultural or economical reasons. According to research conducted by the Korea Women’s Development Institute on women’s awareness and experience regarding abortions in 2017, 29.7 percent of the 593 women polled who either had an illegal abortion or considered having one did so because they were economically unprepared, followed by 20.2 percent who answered they had to carry on with their studies or jobs.

“Most of these reasons go against the Mother and Child Health Care Act,” explains the report. “This means that these reasons are deemed ‘illegal,’ but still take up 98.9 percent [of the interviewees]. Only 1.1 percent of the respondents’ answers follow the law… This shows that the reason why [the state] makes abortion illegal is the exact reason why women would want to get an abortion, and also shows how the rule of law does not reflect women’s realities.”

“Right now, women need a man’s consent to get an abortion,” said Gogi (working name) from Bwave, a feminist group who have put on pro-choice demonstrations since October 2016. “While people think about the fetus, and what that baby may or may not have become, no one talks about what the pregnant woman could have become. The government, which is right now oppressing women on behalf of men, doesn’t take into consideration the many possibilities of the pregnant women. Legalizing abortion is a means to let women freely choose their own lives.”

With most abortion debates, the opposing side holds the fetus’ right to life against a woman’s right to choose or argues that legalization would result in an exponential rise in the number of abortions, which Yun Ji-yeong of the Institute of Body & Culture at Konkuk University believes is the wrong way to approach the issue. The ability to abort does not mean less births, Yun says. “According to the Guttmacher Institute, the highest abortion rate is seen in South America, where abortion is strictly forbidden. 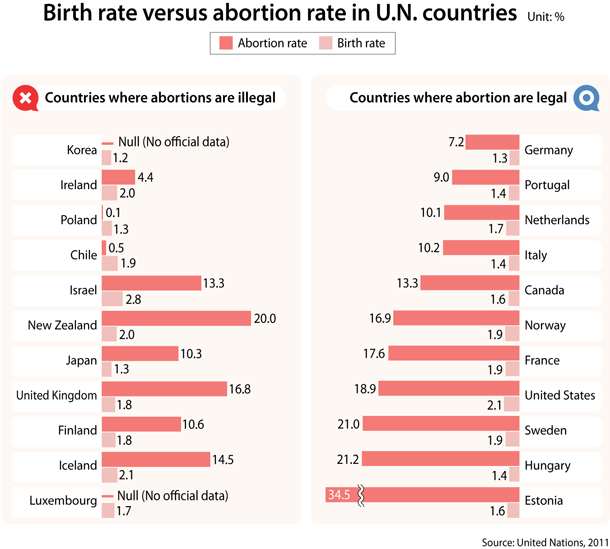 Out of the box

Very little official government data exists on the exact number of abortions carried out in Korea, because of its illegality. The Ministry of Health and Welfare carried out two surveys on the number of abortions that took place in 2005 and 2010, and put the number at 342,433 and 168,738 respectively, although a different and unofficial number estimated by the Korean Association of Obstetricians & Gynecologists puts the estimate at 1,095,000 a year - approximately 3,000 each day.

“Abortion is one of the most performed medical interventions in the world,” Rebecca Gomperts, founder of a Dutch pro-choice nongovernmental organization named Women on Waves told Korea JoongAng Daily when she visited Korea this summer to participate in a pro-choice protest. “An estimated 56 million induced abortions occur each year worldwide. Globally, 25% of all pregnancies end in abortion.

“The restriction of abortion services creates social inequality as traveling to another country where abortions are legal or getting access to a safe underground abortion provided by a doctor are very expensive. This means that women with access to financial means and information will always be able to access safe abortion services, while women without the financial resources usually cannot.”

On Sept. 30, 2017, an online petition was posted on the Blue House website titled “The abolition of the abortion law and legalizing the imports of abortion pills [Mifegyne].” The petition gathered 235,372 online signatures within a month, for which senior secretary of civil affairs Cho Kuk explained the government’s current stance on abortion and how it will “put forward various policies regarding induced miscarriages at the government level.”

Among the unknown number of abortions, only a total of 27 doctors were punished for performing abortions over the past five years according to the Health Ministry: 26 cases from 2013 to 2017 and none this year. Combined with the fact that the number of people who were sentenced for abortion in 2017 was only one, feminist organizations argue that the law has already proved to be useless, and that it’s time for the state to face the facts.

“The abortion law is no longer valid,” said Woo Ji-ann from feminist group Femidangdang. “There was even a case where a man reported his ex-wife for an illegal abortion as revenge for their divorce, and the court ruled both the wife and the doctor who carried out the operation were not guilty. The man was actually later found to be guilty of blackmail. The law is not meaningful any more. But because it’s there, the government always has control over women when they are the ones who take responsibility for what happens.” 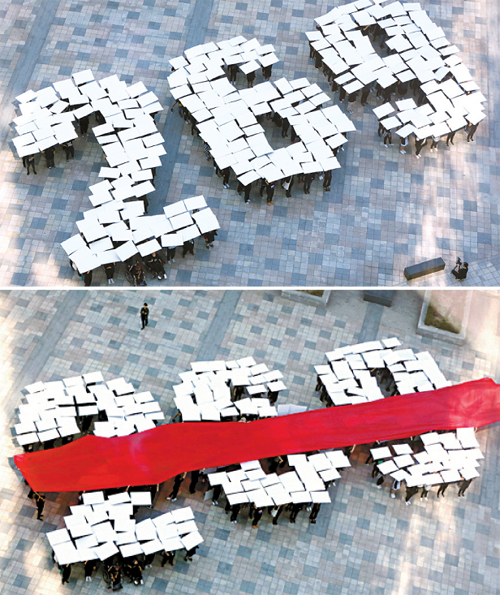 On Sept. 29, Safe Abortion held a performance to call for the abolishment of Article 269 of the Criminal Act, which deems induced miscarriages illegal, except for medical or criminal causes such as when a child was conceived by rape. [YONHAP]

In 2012, the Constitutional Court ruled Article 269 of the Criminal Act as constitutional, meaning that it views abortion as illegal. Another constitutional appeal was filed in May, in the hopes that the law would be overturned due to increasing awareness of feminist issues. The then-members of the court postponed the decision until the new justices were appointed in October and feminist groups saw this as a chance to get a clear answer from the government.

On Aug. 26, Femidangdang put on a performance in Jonggak, central Seoul, where a total of 125 people swallowed either Mifegyne pills provided by Women on Waves, or placebo pills. The number 125 symbolizes the number of abortions taking place every hour in Korea, according to protest organizers. “Abortions are neither something to be hidden, nor a sin. We prepared this performance to call for Mifegyne to be legalized in Korea.”

Femidangdang is preparing for another pro-choice performance in January, which will put the focus on individual female lives. “Each person lives their own lives, within this massive tragedy. For our next performance, we’ll be looking at people’s lives - which are all unique and special on their own - not as an anonymous woman who had abortion,” said Woo.

Bwave will hold its 18th protest on Nov. 17, and have pledged to do so until the Constitutional Court understands that banning abortion goes against women’s rights.

Although the Constitutional Court voted to uphold the current Criminal Act in 2012, activists are hopeful that the new panel may be in favor of overturning it. In 2012, the vote came at a four-to-four from the eight members of the bench. The constitutional court requires six judges to deem a law unconstitutional. Lee Eun-ae, a judge on the Supreme Court, revealed her thoughts on the current abortion law on Oct. 11, saying she personally believes that “right now, the boundaries for legal abortion are too narrow.”

“A total of 230,000 people signed the Blue House petition in a month,” said Womenlink Korea in a statement on Oct. 19. “Pro-choice protests are held every month and three thousand people filled Gwanghwamun Square demanding that the Constitutional Court deem the abortion law unconstitutional. Until the day abortion laws are abolished, the voices of the people will get larger and louder, filling up the streets to the gates of the Constitutional Court and the Blue House.”