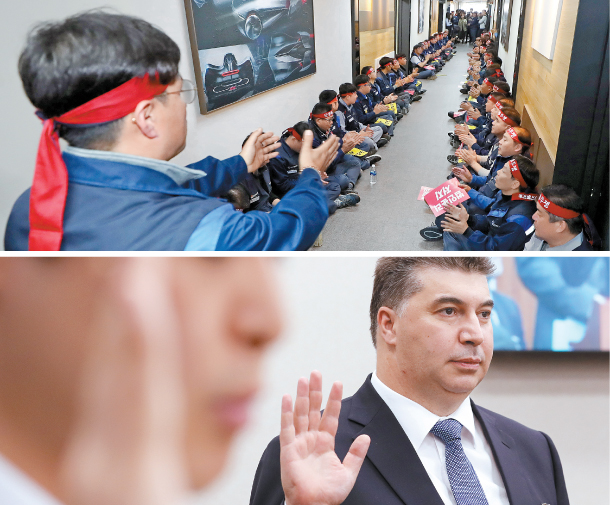 Top: GM Korea’s labor union storming the automakers’ CEO office in Bupyeong on Oct. 19. Bottom: GM Korea CEO Kaher Kazem raising his hands on a pledge during a National Assembly hearing held on Oct. 29 where he was questioned on the spinoff of its R&D and design unit. [YONHAP]

In May, when the Korean government and U.S. automaker GM reached an agreement after tense negotiations, the GM Korea issue seemed to have been solved. But the situation took a sharp turn for the worse recently as GM Korea shareholders decided last month to spin off the local subsidiary’s R&D and design unit as a separate entity under the direct management of the U.S. headquarters. While GM Korea claims that the decision confirms Korea’s key role in the corporation’s global operations and will allow it to meet its obligation to stay in Korea for the next 10 years, the labor union claimed that it is the first step in a strategic market exit. Korea Development Bank (KDB), GM Korea’s second-largest stakeholder, is also concerned. It recently filed for an injunction to stop a GM Korea board meeting approving the spinoff. 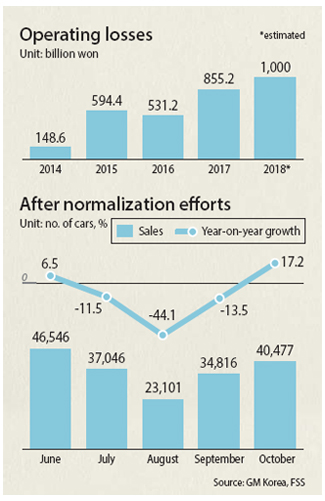 Q. What was the deal between the government and GM Korea?

In late April, the Korea Development Bank, the Korean government and GM struck a deal after months of back and forth over the financing of troubled GM Korea. The parties agreed to invest a total of $7.15 billion, with GM committing $6.4 billionincluding $2.7 billion through a debt-equity swap - and KDB, the second-largest stakeholder of GM Korea with 17.2 percent, paying the remaining $750 million. Additionally, GM agreed to keep GM Korea operating for a minimum of 10 years while reinstating a KDB veto right that expired in October last year.

Other details of the agreement were not disclosed, including those related to the job security of employees.

Q. What were the circumstances that led to the deal being made?

Since early 2017, reports have suggested that GM may exit Korea. It has been retreating in other regions and countries, including Europe, South Africa, Australia, India and Russia since 2015 as part of its global restructuring efforts.

In March 2017, GM completed its withdrawal from the European market by selling two of its European brands ?Opel and Vauxhall- to France’s PSA Group. The following month, it not only ended its local sales in the Indian market but sold one of the two plants - Halol - to China’s Shanghai Automotive Industry Corporation.

The Korean operations haven’t been doing too well, especially since GM stopped selling the Chevrolet brand in Europe in 2013. Europe has been one of GM Korea’s biggest markets. There, it sold the Spark and the Cruise, which were sold under the Chevrolet brand.

With operating losses growing since 2014, GM Korea was seen as the next target for GM’s global restructuring.

This suspicion was reinforced when the company appointed Kaher Kazem as the successor to James Kim as the new head of the Korean unit in August 2017. Kazem was introduced as an expert in corporate restructuring by the local media. He was in charge of pulling out of the Indian market as president and managing director of GM India. One of the first steps that Kazem took after being assigned to the Korean unit was to meet the company’s labor union to address the situation.

The controversy resurfaced when GM Chairman Mary Barra said during an earnings call on Feb. 6 that: “Clearly, Korea is a challenge for us.”

“The Chevrolet brand has done well, but the current cost structure has become challenging, and we’re going to have to take action going forward to have a viable business,” she said.

A few days later, GM Korea announced plans to close its plant in Gunsan as a cost cutting measure.

This created a serious rift with the Korean government and GM Korea’s second-largest stakeholder.

After months of negotiations, GM, the Korean government and KDB reached an agreement whereby KDB will make an additional investment in GM Korea in exchange for GM committing to remain in Korea for 10 years.

Q. So what’s the controversy now?

GM is pushing for the spinoff of the R&D department from GM Korea to set up a separate entity, GM Technical Center Korea. The U.S. automaker’s claim is that the spinoff is part of GM’s long-term plan to make its Korean unit more competitive. A dedicated R&D center would help GM Korea participate in global projects, a move which could strengthen the local unit’s position within GM’s global operations, the carmaker says. Yet the union here doesn’t think so. GM Korea’s labor unit is claiming the R&D center spinoff is a precursor to a complete withdrawal of production from Korea. The union is concerned that GM will take advantage of Korea’s R&D strengths in setting up its own research center while ditching the assembly lines after concluding they don’t benefit the carmaker.

Q. Is there any evidence to support the union’s claims?

The union’s concern stems from the U.S. automaker’s track record of shutting overseas operations over the last couple of years. Although GM Chairman Barra and GM Korea CEO Kazem recently reaffirmed their commitment to stay in Korea as agreed in late April, GM hasn’t hesitated in the past in shutting down unprofitable operations. GM Korea has accumulated an operating loss of more than 2 trillion won ($1.8 billion) since 2014, and that figure could reach to over 3 trillion won by the end of the year.

Although the U.S. automaker may not immediately pull the plug on the Korean operation, as it has already assigned the production of three new vehicles - one compact SUV, one new SUV and a crossover vehicle - the union claims that the spinoff is actually a move that reduces the importance of the Korean production base.

The labor union cites a case in Australia. GM decided to shut down an Australia factory in 2013 when the state government refused to invest more funds into the ailing unit. The state government had already provided nearly $1.8 billion to the operation, and the carmaker aired a nationwide commercial saying, “We are here to stay.” Now, Australia only houses GM’s design center and test center. This could happen in Korea.

Another concern is that the spinoff will reduce the negotiating power of GM Korea’s labor union. About 3,000 of GM Korea’s 13,000 employees would be working under the direct management of GM.

Q. What does GM Korea say?

GM Korea says the latest speculation on the possible withdrawal is nothing but groundless rumors and no help as it works to revitalize the company. GM Korea CEO Kazem said during a recent government audit that the company is looking at staying at least 10 years in Korea. Chairman Barra said she will visit Korea in the near future to mediate the issue with the union. The company said GM Korea needs to grow beyond making small cars as the global trend for cars moves toward bigger SUVs. Making a separate R&D center will help GM Korea obtain projects that are more globally influential, the company says.

Q. Is there any evidence that spinning off an R&D company would fit within the terms of the deal?

It remains unclear whether the spinoff decision complies with the terms of the deal, because the agreement didn’t specifically address the issue of setting up a new unit, according to a KDB spokesperson. Still, the state-run bank argues that the move goes against the deal, as the deal gives KDB veto rights over the sale of shares, mergers and the splitting-off of assets. But based on Chairman Lee’s comments during a parliamentary audit, the agreement only broadly mentions that special resolutions need approval from KDB and doesn’t specifically mention spinoffs. He acknowledged that “It was tough to include all possible management decisions in the agreement.”

What compounds the matter is that the bank failed to have its voice heard during the shareholders meeting as its representatives were blocked from entering the meeting place due to a labor union’s blockade. KDB filed a lawsuit against GM to nullify the results of a shareholder meeting last month. GM Korea, on the other hand, claims that the spinoff doesn’t require KDB’s approval and that the decision was passed with the majority of present shareholders voting for it. The unit will be abiding by the agreement, it adds, because GM will keep its production line in Korea for at least 10 years.

Q. KDB said it could break the deal itself - how is that possible and why would that be necessary?

The bank’s chairman said that the bank could stop funding GM Korea. According to the deal, KDB is supposed to invest around 400 billion won by the end of this year. But if the bank refuses to provide the funding, the deal would no longer take effect. Then, the government is left without any right to deal with GM Korea even if the company exits the country right away. Chairman Lee expressed a similar concern during the audit. The establishment of a new unit itself could not stand as a reason for breaking the deal, because Lee acknowledged that GM made notification of its spinoff plan back in April before the deal was made. This is why the chairman hopes to push ahead with the deal, since the sudden exit of GM Korea would deal a huge blow to the job market and the economy.

“The deal could be done or not if it faces opposition from within the country. But I think it is right to go ahead with the deal.” Still unclear is whether the financial injection could go toward a new unit and whether KDB has the same rights as defined in the agreement with respect to the R&D entity. KDB said that certain matters are unclear and should be clarified through legal procedures.

Q. The shareholders have now agreed to the idea of launching the R&D company - what happens next?

GM Korea plans on registering the new spinoff company with the local Incheon government on Dec. 3. The company is headquartered in Incheon. The company is already working on administrative processes, including relocating the current research and design team under GM Korea to the new company, which will be directly managed by GM. Currently among the 13,000 employees under GM Korea, 3,000 research and development and design personnel will be working at the newly established company.

GM Korea will continue to manufacture and sell the vehicles that have been developed by the new technology center, and the center will receive service payments from GM Korea for developed technologies and vehicles.

Q. Wouldn’t an R&D center be good for Korea?

Setting up a separate R&D center can lead to positive changes. GM Korea said it would not only maintain 100 percent of the current R&D workforce but also additionally hire 100 new employees for the facility. The additional employment will be maintained if the center proves its value to the U.S. headquarters, the company said. Globally, GM is also operating a separate R&D company in China, in collaboration with SAIC, but the market conditions are very different than in Korea.