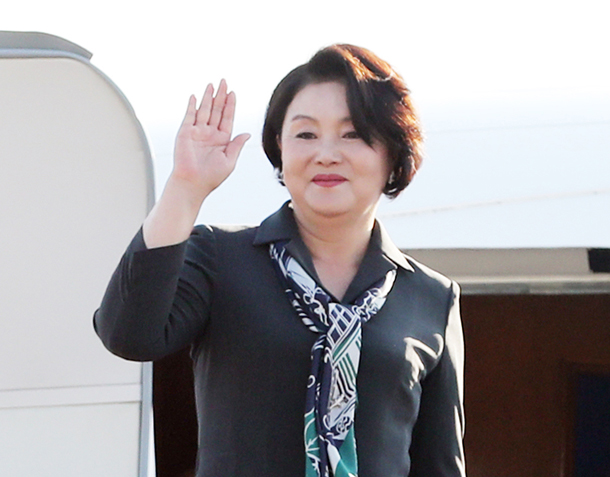 First lady Kim Jung-sook waves before leaving for India at the Seoul Air Base on Sunday. [BLUE HOUSE]

First lady Kim Jung-sook left for India on Sunday to attend a groundbreaking ceremony for a park commemorating the legendary Indian-born wife of the king of an ancient Korean kingdom.

President Moon Jae-in didn’t accompany her as she embarked on the four-day trip. It is the first time in 16 years that a South Korean first lady has made a foreign visit without the president. The last first lady who did so was Lee Hee-ho, wife of late former President Kim Dae-jung.

On Sunday morning, South Korea’s Air Force 2 jet took off from Seoul Air Base with Kim on board.

She plans to meet with Prime Minister Narendra Modi on Monday and attend the groundbreaking ceremony the following day for the park, which commemorates Heo Hwang-ok, also known as Empress Heo, the Indian wife of Kim Su-ro, the founding king of Korea’s Gaya Kingdom.

She is also scheduled to attend a lighting ceremony for India’s Diwali festival of lights.

The upcoming trip follows a state visit by Moon and Kim to India in July.

At that time, Modi asked Korea to send a high-level delegation to the groundbreaking ceremony and the festival to celebrate the history and cooperation between the two countries. Modi later sent an official invitation for Kim to visit the country, officials said.

Officials said the trip signifies the government’s will to move relations with India further forward.