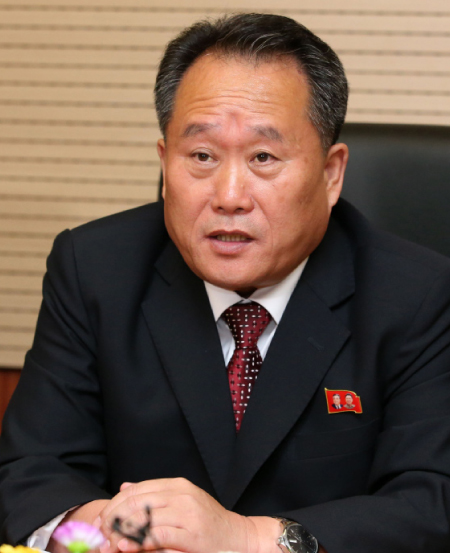 Ri Son-gwon, a senior North Korean official, poked fun at the Democratic Party (DP) Rep. Kim Tae-nyeon’s pot belly during an inter-Korean event in Pyongyang last month, according to participants in the event.

“Those with a pot belly should not be entrusted with a budget,” Ri was quoted by participants as saying after an official of the ruling Democratic Party introduced Kim as the DP official managing the government’s budget at a dinner in Pyongyang on Oct. 5.

A 160-member group of government officials and members of civic groups visited Pyongyang from Oct. 4 to 6 to commemorate the inter-Korean summit of 2007 for the first time.

Ri is the chairman of the North’s Committee for the Peaceful Reunification of the Country, which handles inter-Korean relations.

This is not the first time Ri’s remarks aimed at South Koreans raised eyebrows.

It was revealed during a parliamentary audit in late October that Ri had scolded South Korean business tycoons in September when they visited Pyongyang with South Korean President Moon Jae-in as part of his delegation for the third summit between Moon and North Korean leader Kim Jong-un.

Over a lunch with the tycoons, including executives of Samsung, SK and LG, Ri asked, “Do the cold noodles go down your throat?”

In Korean, the expression is a way of scolding someone for being too comfortable. The South Korean delegation at the time was eating a bowl of Pyongyang-style naengmyeon (cold noodles) at the famed Okryu Restaurant.

As local media outlets reacted to the comment, some members of the DP tried to tone down the news.

“Stop making up gossip,” Rep. Kim told reporters on Sunday after a meeting at the National Assembly.

When asked if Ri had indeed commented on his pot belly, Kim laughed and did not deny the comment. To a reporter’s question on whether the comment was made “in all seriousness,” Kim said it was not.

“North Korean people tend to tell blunt jokes anyway,” a member of the DP told Yonhap News over the phone on Sunday. “Sometimes the jokes may carry more meaning behind the words, but we do the same, too. We need to understand [Ri’s comments] in context. It could have been a lighthearted joke in a friendly manner.”

Recent comments by Ri drew some consternation among opposition lawmakers.

“The cold noodle comment is just humiliating,” the Liberty Korea Party floor leader Kim Sung-tae said in a radio show on CBS on Friday. “Sure we need inter-Korean relations to improve, but these are executives of top companies of South Korea we are talking about - someone should have protested this comment right then and there.”

Some experts attributed Ri’s recent comments as typical of his personality.

“Ri has a hasty personality,” said Moon Seong-mook, chief of Unification Strategy Center of Korea Research Institute for National Strategy, who met Ri in person over inter-Korean military talks in the 2000s. “He would put on a hard persona over these talks.”

Others said Ri’s jokes are a part of his strategy.

“Ri’s comments are not unplanned,” said Nam Sung-wook, a professor of North Korea studies at Korea University. “North Korean counterparts always have a plan on what roles they will play in these meetings. Through Ri’s comments, the North is telling the South to choose either the North or the United States.”