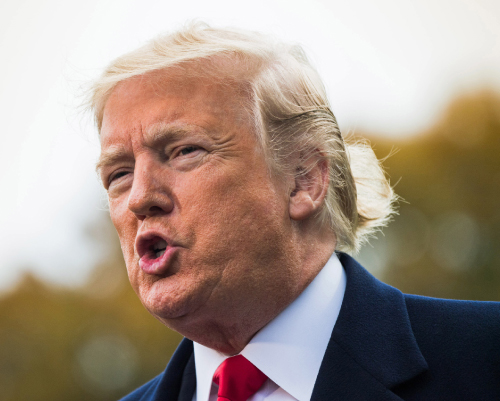 U.S. President Donald Trump speaks to the media as he departs the White House for a series of rallies in West Virginia, Indiana and Montana, on Friday, in Washington. [YONHAP]

“We are getting to a point where they really want to do something,” he said, apparently referring to the North’s promise for denuclearization in exchange for sanctions relief and a guarantee of regime security during a rally in Missouri Thursday. Touching on the fact that North Korea has not conducted any missile or nuclear tests since last November, President Trump boasted, “And we’re not going to have to worry about millions of lives being lost and nuclear weapons going up all over the place and flying over Japan and everybody else.”

Trump’s boasts of resolving the North Korean nuclear problem suggested he was trying to use the issue to rally support from voters for the upcoming midterm elections, which are seen as a referendum on his performance as commander in chief over the past two years. The outcome could also harden Trump’s position on North Korea if election results are not favorable to his Republican Party.

Celebrating his North Korea policy achievements, Trump said, “We’ve got our hostages back right, we’re getting the remains,” referring to the return of remains of U.S. soldiers killed during the 1950-53 Korean War. “I don’t know if you saw how beautiful that was … [U.S. Vice President] Mike Pence went to Hawaii. The remains of our great heroes from so many years ago are being sent back.”

Continuing his optimistic take, he remarked, “If you read the papers today, it came out to the surprise of a lot of people - not a surprise to me - that they don’t mind having people come over, the experts and check the sites.” While he did not specify what those sites were, he was likely to be referring to the Tongchang-ri missile engine test site. North Korea has agreed to invite foreign experts to inspect its dismantlement.

The North’s promise to allow foreign experts to verify the test site’s termination is stipulated in the Pyongyang Declaration signed by North Korean leader Kim Jong-un and South Korean President Moon Jae-in on Sept. 19 in the North Korean capital.

Trump’s affirmation that sanctions still remain imposed on the Pyongyang regime is in line with a comment by U.S. Secretary of State Mike Pompeo in which he said the United States “will keep the economic pressure in place” until the North’s denuclearization promise is delivered.

“I’m confident that we will keep the economic pressure in place until such time as Chairman Kim fulfills the commitment he made to President Trump back in June in Singapore,” the U.S. top diplomat said in an interview with Fox News Friday.

He went on to note that he will be having a meeting with North Korea’s “number two person” sometime this week to discuss the North’s denuclearization. Echoing President Moon’s assurance that Kim was sincere about denuclearization, Pompeo remarked the North Korean leader “has made clear his intention to denuclearize” in each of their meeting together.

Pompeo’s remark that economic pressure will remain in place until the denuclearization commitment is fulfilled, however, drew a angry reaction from the North Friday evening, warning it could return to a two-track policy of pursuing both economic development and nuclear program, known as byongjin, if the United States does not show changes in its stance and continued to “act arrogantly,” in a statement run under the name of a North Korean foreign affairs ministry official and carried by the Korean Central News Agency.

“If the U.S. does not heed our repeated demands and does not show any change of stance and act arrogantly, we might adopt another path in addition to the economic growth policy adopted in April, brining back the term ‘byongjin.’ Such a change in position could seriously be reconsidered,” the statement read.