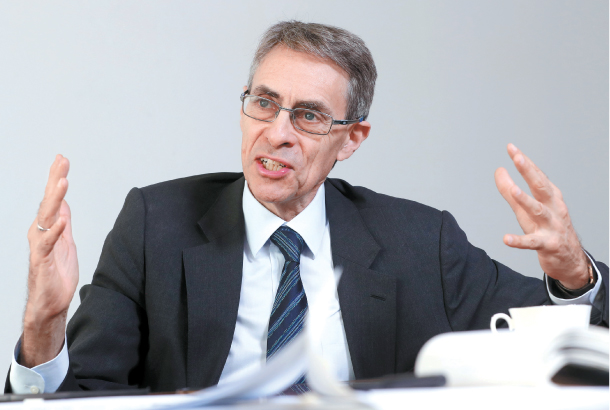 While the world focuses on whether North Korea will truly abandon its nuclear ambitions, the country’s dismal human rights record has largely fallen out of the picture.

But the realities of the repressive state are not lost on the watchdogs working to ensure that human rights in North Korea are discussed by the leaders and diplomats engaging with Pyongyang. The New York-based Human Rights Watch is one such organization. It has a presence in over 90 countries and is playing a key role in pressuring governments to denounce abuse everywhere.

Its latest report, titled “You Cry at Night but Don’t Know Why,” made headlines around the world for exposing systemic sexual abuse of women in the North. It was based on harrowing testimonies from over 50 women who have since fled the country.

Q. Why did you decide to research sexual abuse of North Korean women?

A. There are several reasons why we chose this topic. One is because this is a serious issue. There are large numbers of women preyed upon by officials and subject to rape and sexual violence. In and of itself it is an important topic. Second, it is part of our effort to humanize North Koreans. There is a tendency in the rest of the world to view North Koreans as a persecuted mass of people without thinking of them as individuals. We feel sexual violence makes North Koreans’ plight come to life. It’s important to identify to generate pressure for change.

This is not an issue that is hard to fix. We are not asking for elections or a free and independent media. Nothing about ending rape is revolutionary. Kim Jong-un could end this tomorrow and still be in charge. We feel that this issue is fixable. It is just a matter of generating the political will.

Sexual abuse is a common issue in every problematic region, but do you think there is something particular about North Korea’s case?

I do. You get sexual violence in wartime or prison situations. What struck me is that many of these victims we describe here are just women who work in the marketplace, who in their day-to-day encounters with the police find themselves preyed upon.

What is most stark for me in reading this report is that these women have come to accept this as a part of life. The problem is so pervasive. The remedies are so distant and unthinkable. What’s shocking is that most of them do not think of it as rape.

The crime of rape in the penal code in North Korea is not defined well. As a result, most North Koreans think of rape as requiring violence, but in this case, it is coercive. Women are subject to the whim of official men. And so they no choice but to submit to requests for sexual favor. And that coerced sex is rape, but they don’t think of it that way.

Indeed, many of them feel stigmatized and do not come forward. Women who would risk coming forward put themselves at risk. There is something fatalistic about it. I cannot think of another situation where sexual violence is a part of the system.

I don’t think there is another society as closed and totalitarian as North Korea. I can’t think of a comparable situation where men are systematically able to do whatever they want while women have no recourse.

How can we address this situation in North Korea?

I don’t think the situation is that complicated. This is not a regime-threatening solution. Kim Jong-un could decide tomorrow not to put up with rape. The elements are very straightforward. The law is already in place. Not only do the North Koreans already have a law against rape, they actually have a law against people in senior positions having sex with subordinates. It’s almost a progressive law in that sense.

Partly, they could just announce that they are going to enforce the law, that they would not tolerate this anymore. Part of it is building a public education program to let women know keeping silent would not be expected of them as they have avenues of recourse. And when you have an offender, rather than pushing it under the rug, actually prosecute them.

The families of these women in the market are just as powerless as they are. If someone goes after the daughter of a high-ranking official, there may be consequences, but in most cases, victims are women without any power.

Are there practical ways to persuade Kim Jong-un on this issue?

Step one is that governments have to raise the issue in public settings. One of the problems is that [South Korean] President Moon Jae-in has a one-dimensional approach to the North. We have denuclearization now, and anything else comes later. It’s crazy. If Moon were to have the vision and political courage to begin talking about rape, it would be unconceivable for Kim Jong-un to go back on the issue. Moon is simply not trying. We shouldn’t pretend you can’t do two things at once. If governments begin to press North Korea, the arguments are straightforward: If you claim to be in the modern world, solving this issue is a simple way to start.

There is an argument that bringing up human rights in negotiations with the North distracts from other pressing matters like denuclearization. What do you think about this?

We have to recognize the Moon government began this line of thinking under the threat of imminent war, because of [U.S. President Donald] Trump. Fortunately Trump solved this problem by meeting Kim, and now they are best friends.

Now we are back to where we were. There is a perennial nuclear problem. Let’s look at whether human rights is part of this or is kept secret.
Step one is to recognize there would be no nuclear problem today if human rights were respected in the North. North Koreans are impoverished, and if they had a say in the matter, there would be no way resources would be diverted to making a nuclear bomb. Building a government accountable to the people is one way the human rights issue is not distinct, it’s connected.

The second way is that it’s good to lower tensions between the two sides on the 38 parallel. And one way this is anticipated to happen is through economic exchanges, investment in North Korea. But the problem is, who would invest? China and Russia probably will. But if you are a major South Korean company, would you risk your company’s reputation by investing in North Korea under these conditions? You build a factory in North Korea, suddenly you have workers you are responsible for. These are workers who could be hauled to a corner room and raped, if somebody builds a union, they will be imprisoned. Suddenly you find yourself complicit in human rights abuses. You would have to be crazy to invest in these circumstances.

There was a recent report that the South Korean government is asking refugees from the North to stay quiet on human rights. What do you think about such allegations?

If it is true that North Korean human rights activists feel that the government is impeding them, President Moon should disabuse them of this impression and should make clear that he, particularly as a former human rights lawyer, upholds the freedom of speech of everyone and would never want to censor people who speak about important issues, like the human rights of people in North Korea.

Moon recently met Pope Francis and relayed an invitation to visit North Korea. Do you think the pope should go?

I would love to see the pope go to North Korea to bless a free church, to bless freedom of religion. I don’t think it would be wise for him to go bless a dictatorship. The pope would go to greet free parishioners. Once that is the case, he should go. If there is freedom of religion, he should go. At this moment, he shouldn’t go. The symbolism matters. You don’t go to persuade, but to embrace existing freedoms.

This is part of the broader question, what is the right balance between persuasion and pressure? Persuasion doesn’t move people. In a context like this, Kim Jong-un is a rational actor. He has rationally decided that, if he wants to stay in power, he has to viciously repress his people. This is part of his strategic calculus.

There is an argument that North Korea would not talk to the South if human rights issues are raised. What do you think about this?

That argument is false. Just imagine that Moon went in and discussed human rights with Kim. Do you think that North Korea would slam the door? That would be a public relations disaster for them.

The reason why Moon is not raising this issue is because he doesn’t want to. This is not impossible, it’s because of a lack of political vision and political courage. When people have connected human rights with things North Korea wants, human rights issues proceed. When North Korea wanted humanitarian aid, Unicef and World Food Programme offered this in exchange for higher human rights standards. They took it.

What is the United States’ policy towards human rights in North Korea? What is President Trump’s policy?

We have to distinguish Trump from the U.S. government. Trump’s policy was create a crisis and solve it through personal diplomacy. It’s not sophisticated. The rest of the U.S. government cares about human rights in North Korea since it is legally obligated by a law of Congress. That U.S. government helps us raise the issue in an annual conference at the UN.

You used to work as a prosecutor in the United States. Why did you decide to jump into activism?

The current administration is left-wing but has been criticized as being passive on human rights in the North. Tell us more about that.

How is Human Rights Watch different from other human rights groups around the world?

Human Rights Watch works in 90 places around the world — every place where there is war and serious repression, as well as others. We are known for the rigor of our investigations. They are careful and conducted objectively.

We are also known for our public policy work. We will speak to governments with concrete recommendations, and we are known for the sophistication of our policies. We also have a very high media profile. Journalists understand that we are accurate, fair and have interesting things to report.

Have you to tried to talk to the South Korean government about these human rights issues?

We met with [the South’s] Foreign Minister Kang Kyung-wha, we met with [the] vice minister for unification. We requested to meet with Moon, but we were disappointed that he said no. Typically when I travel, I meet with heads of state. We have information useful for them, but Moon did not want to meet. This suggests that he doesn’t want to talk about a very important issue.

Do you feel Foreign Minister Kang, who used to be a deputy high commissioner at the UN for human rights, has changed in her approach to the issue?

She’s the same person, but she has different constraints today than she did as deputy high commissioner for human rights. But we encourage South Korea to play more of a leadership role in Asia. South Korea is one of the leading democracies in the region, but it doesn’t yet think about the responsibilities that come with that. We should be hearing South Korea speak about things like the Rohingya issue in Myanmar, or Vietnam’s decimation of civil society. Where is the South Korean voice on different regional issues? It does nice work in Geneva and the human rights council, but we want it to take a leadership role here in Asia.