On Monday, Korea football coach Paulo Bento said that he respects the national football governing body’s decision to punish a core defender with a lifetime ban following the player’s misconduct. 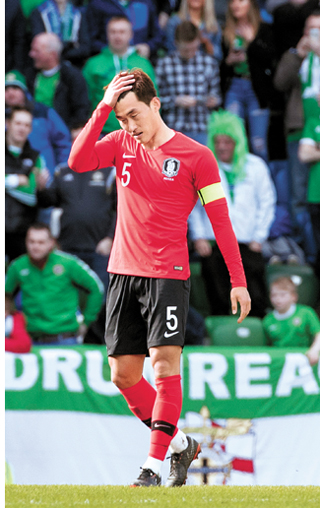 “We have to accept the KFA’s fair sports committee’s decision and its punishment against the player,” Bento said during his press conference at the KFA’s House in Seoul. “We respect and understand the decision.”

Per conscription law, Jang needs to complete 544 hours of sports-related community service over 34 months following his exemption from military service. The FC Tokyo player received an exemption from the full mandatory service after he helped Korea win the gold medal at the 2014 Asian Games.

Jang admitted his wrongdoing after a lawmaker accused him of falsifying records. The lawmaker claimed that photos submitted by Jang as proof of his community service on various dates were actually all taken on one day.

Jang, 27, has been the first-choice center back under Bento. He has played in all four friendly matches on Bento’s team, and was a starting center back in three of them.

Bento previously described Jang as an above average player, praising his role in defense and build-up from the back.

The Portuguese coach said Jang’s absence will be a “big loss” to his team.

“Jang is a player who can help us in terms of tactics, techniques, and experience, but it’s a pity that he is now unavailable,” he said. “Obviously, his absence is a loss for us.”

Although Jang is now permanently barred from playing for the national team, he can still resume his football career with pro clubs. Bento said he wishes Jang good luck.

“I haven’t personally talked with Jang, but I want to thank him for what he did for us in the last four matches,” he said. “What’s happened in the past is the past, and he is getting punished for his mistakes. I wish him good luck in his future career.”

Asked about Korea’s military service, Bento said that as a foreigner he respects each country’s culture and understands that he needs to adjust to the new environment.

“I’ve been told since my childhood you have to respect decisions from the group or organization that has authority to handle the situation,” he said. “Again, I fully understand and respect the KFA’s decision. Jang could have been a player who really helped us in the future, but now, we have to find alternative plans. We will find solutions.”

Bento said that despite Jang’s absence, Korea will maintain their play style in the upcoming matches. The Taeguk Warriors are scheduled to face Australia on Nov. 17 and Uzbekistan three days later. The two friendlies are tune-ups for the 2019 Asian Football Confederation’s (AFC) Asian Cup in the United Arab Emirates that kicks off two months later.

“We have to find a player who can replace Jang’s role on the national team,” he said. “But I’m not sure that I’ll be asking the player to serve the same role as Jang because each player has his own characteristics.”

As a replacement for the November friendlies, Bento has added Kwon Kyung-won, a defender with the Chinese Tianjian Quanjin who returned to the national team after having been away since June. He is one of the five center backs on Bento’s 26-man roster for the friendlies in Brisbane, Australia.

“We’ll keep our style in the big picture, but with newcomers, we’ll have to apply our tactics based on their style of play,” he said.”