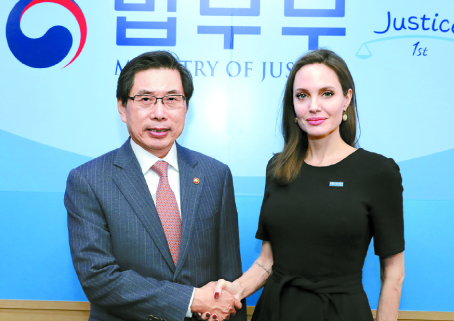 American movie star and United Nations High Commissioner for Refugees (UNHCR) special envoy Angelina Jolie met with Korean actor and UNHCR Goodwill Ambassador Jung Woo-sung and the Minister of Justice Park Sang-ki to discuss the status of Yemeni asylum seekers in Korea over the weekend, according to a UNHCR representative.

On Saturday, Jolie met with Jung at the UNHCR office in Seoul where they shared their experiences visiting refugee sites and discussed the issues surrounding the Yemeni asylum seekers in Korea. Several hundred Yemenis arrived in Jeju seeking asylum in May.

“It is true that anti-refugee sentiment exists in Korea,” Jung said, after mentioning that he has been the target of many online attacks for openly supporting refugees. “But [the reason it seems to be dominant is because] the opponents have loud voices. Most people either don’t have an opinion due to a lack of knowledge or are quietly supporting the asylum seekers.”

On Sunday, Jolie met with Minister Park at the Ministry of Justice complex located in Gwacheon, Gyeonggi to stress “the importance of having thorough procedures in place as well as making efforts to provide [asylum seekers] protection until they are able to safely return to their country of origin,” according to a statement from the UNHCR.

She also delivered her wish for the Korean government to work closely with the UNHCR to strengthen the asylum system and thanked those who have been sending financial support to the asylum seekers.

According to multiple international and local media outlets, Jolie arrived in Korea on Friday along with her 17-year-old son Maddox and 14-year-old son Pax. They were spotted touring Yonsei University in northwestern Seoul over the weekend.