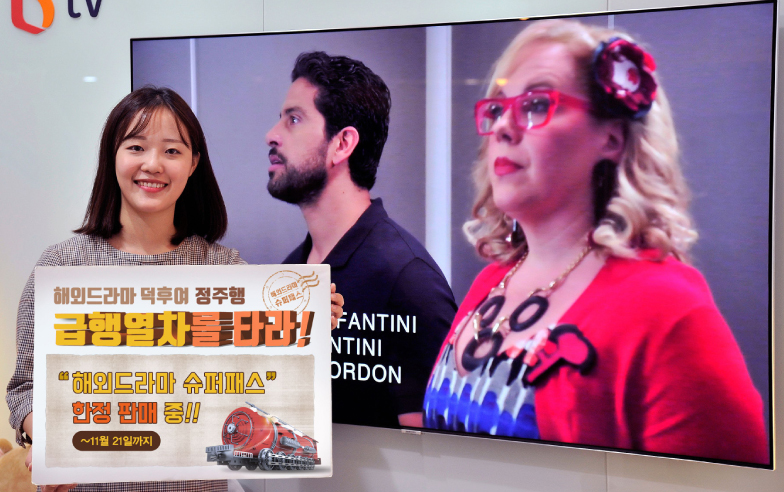 Right now, the battle is over who gets to offer the most popular content from overseas, like “Game of Thrones” and Netflix Originals.

On Oct. 30, SK Broadband’s B tv launched its Foreign Drama Super Pass. Users who purchase the pass, priced at 9,900 won ($8.80) a month, will have access to 1,448 episodes from famous TV drama series like “Game of Thrones,” “The Big Bang Theory,” “Criminal Minds” and “The Walking Dead.”

This limited-time offer will only be available for purchase until Nov. 21.

SK Broadband likely had its IPTV competitor LG U+ in mind when releasing its Super Pass.

Earlier this year, LG U+ scored a deal with Netflix to air its shows including Netflix Originals. The Netflix debut on U+ TV is expected to take place this December.

“Besides Netflix Original series produced in Korea like ‘YG Electronics’ and ‘Kingdom,’ users will be able to watch 20,000 shows through U+ TV including Netflix Originals,” said an LG U+ spokesman. Users will likely have to pay extra to access Netflix content.

Olleh TV has been airing U.S. shows from ABC and Sony Pictures Television as early as 2015. It even offers a special ABC TV series bundle which provides users access to ABC exclusives like “Castle,” “Desperate Housewives,” “Criminal Minds” and “Grey’s Anatomy” for a monthly 7,700 won.

Early last year, it launched the Prime Asia Pack for fans of Chinese and Japanese TV shows. The pack, which offers over 7,200 episodes, is priced at just 8,800 won a month.

“We plan to expand our selection of Asian dramas,” said a KT spokesman.

A key factor that’s been driving mobile carriers to invest more in their IPTV business is the changing landscape of the mobile carrier industry.

Their TV businesses tell a different story, however. According to SK Broadband’s third-quarter report, revenue from its IPTV division is at 322.8 billion won, a 26.3 percent increase on year.

“Our media business division saw higher revenue and more new users this quarter, proving itself to be a major growth engine,” said an SK Telecom spokesman.

The carriers are counting on their IPTV sales to breathe new life into their mobile division as well, as they continue to attract users by offering mobile plan discounts for TV service subscribers and vice versa.

“We will soon start seeing users change their phone carriers based on the IPTV service provider of their preference,” said another industry spokesman.