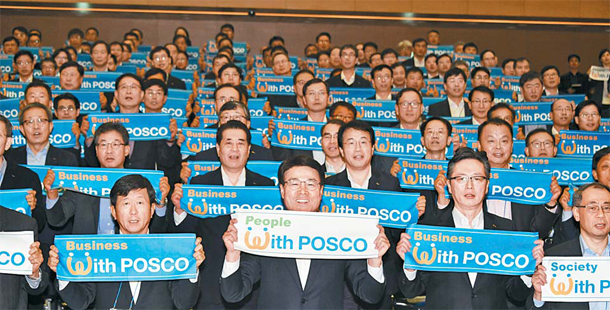 Rather than drawing out a new long-term picture for the steelmaker, Choi proposed over a hundred short term targets to make the 2030 goal during a speech to executives on Monday. The 2030 goal was originally proposed during the company’s 50th anniversary in April. In a decade, the steelmaker hopes to make 13 trillion won in operating profit.

Before going as far as 2030, Choi also said he wants to make Posco the top metal company in Fortune’s list of the “World’s Most Admired Companies” by 2023.

To strengthen the core steel business, Choi said he will focus on expanding the sales portion of high-value added products like automotive steel. As carmakers lean toward light but strong steel plates, the product has become dependent on high level of technology.

Korea’s largest steelmaker will also focus on developing cost-cutting technologies to make steel and reach out to outside companies for collaborative research and development.

The new chairman plans to streamline the business portfolios of affiliates to prevent them competing in the same markets.

While Posco and Posco Energy have been involved in sourcing liquefied natural gas, the conglomerate’s trading company Posco Daewoo will take care of the LNG trading business for efficiency.

All construction related businesses, including construction designs, inspection and maintenance, will also be absorbed by Posco Engineering and Construction.

Whether Choi’s comments on integrating the two businesses means the company will merge Posco ESM, which makes cathode materials, and Posco Chemtech, which makes anode materials, is unknown, but industry analysts think the option is likely.

For the battery materials business, Choi said it will take 20 percent of the market share in the cathode and anode materials market by making 17 trillion won in annual sales by 2030.

As the steelmaker already announced a five-year plan to invest 45 trillion won in September, Choi said he will use the investment to make the proposed reforms go smoothly. The company will also hire 20,000 more staff for business expansion.

Apart from business goals, Choi emphasized growing “together” with business partners and society, in line with the “With Posco” slogan he announced during his inauguration ceremony.

Choi said he will establish a special committee that listens to the public and business partners and forms strategies to contribute to society. Choi will recruit an outside expert in forming social contribution strategies and participate in the committee himself along with some outside executives.

At Posco’s steel mills in Pohang, North Gyeongsang, and Gwangyang, South Jeolla, the company will create a venture valley, an economic zone that nurtures start-ups, to help young entrepreneurs grow.

The company also unveiled improved employment benefits, especially for mothers, such as expanding the number of day care centers at its business sites. For business partners and contractors, Choi vowed to open a reporting window for power abuse by Posco employees.

“My vision is to make a fair and cooperative business culture between employees, affiliates, and contractors,” Choi said.

The chairman said he will speed up the company reforms with a follow-up organizational reshuffle in December.