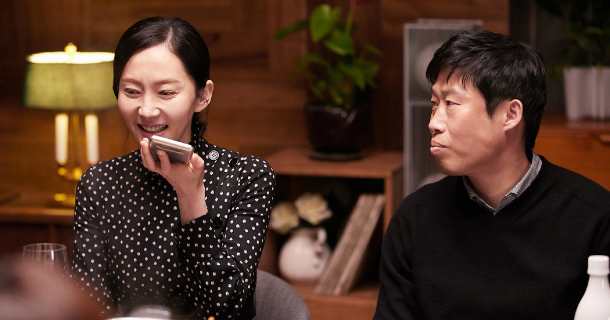 It was a winning weekend for the newly-released “Intimate Strangers,” pushing zombie thriller “Rampant” to third in its second weekend.

“Intimate Strangers,” a remake of the 2016 Italian film “Perfect Strangers,” sold 1.17 million tickets at 1,313 screens from Friday to Sunday, pulling in more than 10.45 billion won ($9.3 million) over the three days and making up 52 percent of the nation’s movie ticket sales.

Directed by Lee Jae-kyu of “The Fatal Encounter” (2014), the film unfolds as a group of childhood friends and their spouses gather at the fancy home of plastic surgeon Seok-ho (Cho Jin-woong) and his psychologist wife Ye-jin (Kim Ji-soo) for dinner.

While at the table, Ye-jin brings up the idea of playing a game. The rules require the guests to reveal every text, phone call and social media notification that pop up on their smartphones throughout the night. She invites them all to join in on loudly reading out text messages and putting their calls on speakerphone for everyone to hear.

The game starts off exciting, but quickly turns into a complete disaster that leaves everyone feeling disappointed and betrayed.

The story of British rock band Queen sold 523,000 tickets at 936 screens, accounting for 24.6 percent of the weekend’s sales revenue.

The movie depicts the band’s rise to fame and popularity following the release of their hit songs “We Will Rock You” and “We Are the Champions,” as well as the struggles Freddie had with drug use and revealing his sexuality.

The zombie thriller, set in the Joseon Dynasty (1392-1910), is a coming-of-age tale of Yi Chung (Hyunbin), a prince who returns from the Qing Empire after his brother - the trustworthy crown prince - dies.

Upon returning to Joseon, Yi encounters zombies who feast on the necks of whoever they catch and rapidly spread their disease. Though Yi initially plans to return to the Qing Empire after the short visit, he gradually becomes invested in handling the zombies.

Two other new releases rounded out the top fourth and fifth. 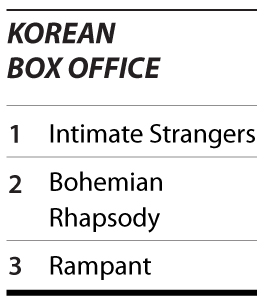 “The House with a Clock in Its Walls,” about a young orphan who aids his uncle locate a clock powerful enough to bring about the end of the world, came at fourth. Starring Cate Blanchett and Jack Black, the movie is based on a novel by the late John Bellairs.

Horror movie “Halloween,” which arrived in theaters just in time for the holiday on Wednesday, debuted at fifth in its first weekend.