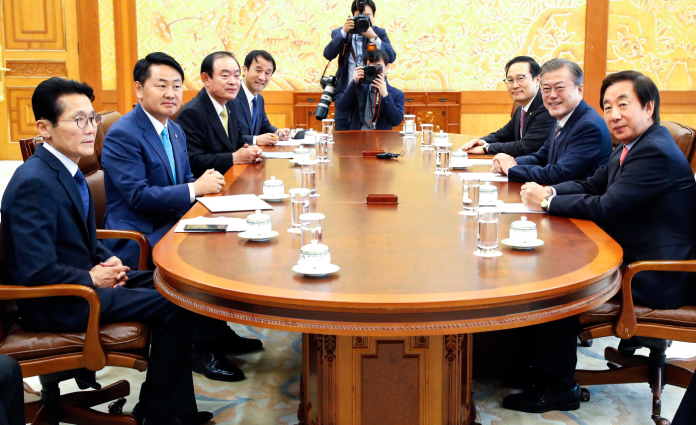 South Korean President Moon Jae-in said Monday he was preparing to invite North Korean leader Kim Jong-un to Seoul and hopes he will come by the end of this year at a meeting with floor leaders of five political parties at the Blue House.

Moon also expressed the hope that the National Assembly will issue a welcoming statement to Kim in a bipartisan spirit, according to a floor leader who attended the meeting.

“On the issue of whether North Korean leader Kim will make the reciprocal visit to Seoul as agreed, the president said [the preparations] are underway,” Hong Young-pyo, floor leader of the ruling Democratic Party, told reporters at the National Assembly after a nearly three-hour long meeting with Moon and floor leaders of four opposition parties.

“While it remains to be seen whether the visit will be realized by the year’s end, he said the government has been preparing for the visit on the premise it will happen this year,” Hong continued.

Moon was also quoted as saying by Rep. Kim Kwan-young, floor leader of the Bareunmirae Party, that he “would like to have the National Assembly issue a welcoming statement” for the North Korean leader. Rep. Kim said the issue of such a statement would be discussed at the Assembly.

On the idea of North Korean leader Kim delivering a speech at the National Assembly like another foreign leader, Rep. Kim said that would need to be discussed by lawmakers.

Moon’s comments came amid growing speculation that North Korean leader Kim’s visit will likely be postponed to next year.

Moon was quoted as saying that he was “coordinating with various opinions on whether Kim’s reciprocal visit to Seoul should take place before or after the North-U.S. summit,” which has been tentatively scheduled for next year, though neither a date nor a venue has been determined.

Moon and Kim agreed in the Pyongyang Declaration signed on Sept. 19 that the latter would visit Seoul by the end of this year.

Moon’s meeting with the floor leaders of the five parties, including floor leader Kim Sung-tae of the major opposition Liberty Korea Party, came after the Blue House and parties agreed in August that they would hold such a consultation once every three months in an attempt to reach middle ground on a wide range of policy differences.

The Monday meeting, which began at 11:20 a.m. and ran until 2 p.m. with a meal being served, was the first of its kind, and a second meeting will be held in February.

Following the three-hour meeting, the parties issued a joint statement covering a number of agreements reached with Moon, including a consensus to expand the scope of benefits for child rearing to raise low birthrates and to deregulate excessive business regulations thwarting innovative business models. They also agreed to strengthen legal punishment for drunk driving and filming people secretly and without their consent.