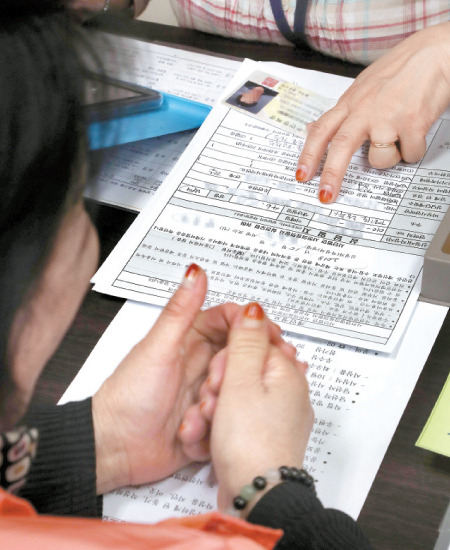 A consultant at the National Medical Center in central Seoul checks an advanced medical directive signed by an elderly lady on Oct. 8. After this directive is signed, it will be stored at a Korea National Institute for Bioethics Policy database for the future. [CHOI SEUNG-SHIK]

A long line of elderly patients formed outside the National Medical Center in Jung District, central Seoul, on Oct. 8.

They were waiting for consultations on advance directives, which refuse life-prolonging treatment in the event of a medical emergency.

“I am already 94 years old. I want to decide how I die when I have the chance. I do not want to be subjected to meaningless, yet painful, treatment during the last days of my life,” said an elderly woman surnamed Lee after her consultation.

“An average of 10 people, sometimes even 30, come [every day] to sign an advanced medical directive,” said Yoo Gyeong, a consultant at the National Medical Center.

Since Korea’s “dying with dignity” law went into effect in February, 58,845 people have signed advance directives that refuse life-prolonging treatment. Once people sign an advance directive, the data is stored in the Korea National Institute for Bioethics Policy database, to be used once the time comes.

Out of all the possible ways to refuse life prolonging-treatment, signing an advance medical directive is the most surefire way. It provides a clear indication of the patient’s wishes and can be used immediately after the directive is retrieved from the database. Other options are often time-consuming, and the patient’s wishes could easily be distorted in the process.

Since patients are often unaware of this option to begin with, doctors are required to explain it to the patient and then receive their signature of approval. However, doctors who are not familiar with the protocol often neglect to advise their patients about advanced directives.

If there is no advanced medical directive from the patient, the burden of deciding whether to discontinue life prolongation treatment is with the patient’s family.

In the worst case scenario, signatures from all of the patients legally registered as kin will be needed in order to end treatment and let a patient die. Problems can arise when all family members do not come to a single consensus.

One patient with terminal lung cancer was admitted into a university hospital after having breath complications. The patient was then attached to a respiratory device that would aid his breathing.

His children eventually wanted to stop the medical treatment, but could not end it because his wife was adamant that he had to continue to receive treatment. Because every family member was not on board with the decision, the patient had to live in the ICU for an additional month before passing away.

Another patient attempted suicide after suffering from postpartum depression and was rushed into the emergency room. Hours later, she was declared brain-dead and hooked up to a respiratory device that would help her with her breathing. Her husband, who wished to send his wife off in peace, asked to take her off the ventilator.

The patient’s mother, who wished to continue treatment, disagreed, and she stayed on the ventilator.

Without an advanced directive, taking a patient off of life support can be time consuming and burden a patient’s family emotionally.

“Most doctors often choose not to push patients to choose an agreement to discontinue life prolongation treatment, which is why it is crucial for patients to sign an advanced medical directive if they want to die with dignity,” said Hong Yang-hye, the head of the Korean Initiative for Advance Directive.

“At the very least, people should communicate their wishes to their children. Communicating your wishes in advance will help lessen the burden that family members will possibly have to go through later on.”