No winners yet in Korean Series

No winners yet in Korean Series 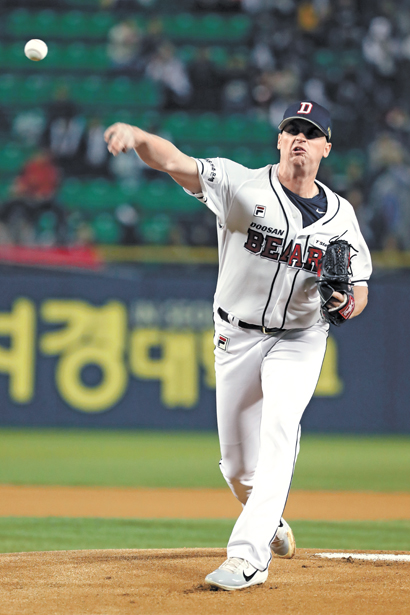 Seth Frankoff of the Doosan Bears throws a pitch during Game 2 of the Korean Series at Jamsil Baseball Stadium in southern Seoul on Monday. [NEWS1]

The 2018 Korean Series may not have started the way the Doosan Bears wanted, but Monday’s decisive 7-3 victory against the SK Wyverns has seen that the series will head to Incheon today with a score tied at 1-1. 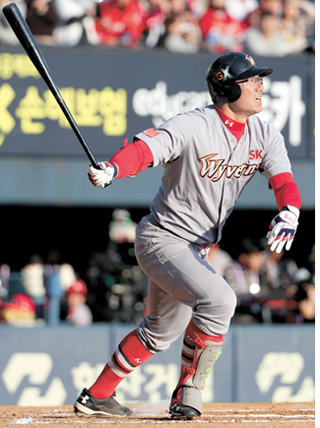 Park Jung-kwon of the SK Wyverns watches his two-run home run during Game 1 of the Korean Series at Jamsil Baseball Stadium in southern Seoul on Sunday. [YONHAP]

Things got off to a bad start for the Bears. In Game 1, the Bears, who had spent the last three weeks training in Japan, looked like they were still in vacation mode. The Wyverns were quick and merciless, their momentum from the playoffs helping them beat the pennant holders 7-3. Han Dong-min got the ball rolling with a two-run home run in the first inning and Park Jung-kwon sealed the deal with another two-run homer in the sixth.

“The key thing today was we managed our free passes,” Wyverns manager Trey Hillman said after Game 1. “Our bullpen executed pitches when they had to and got themselves out of some jams.”

But the Bears had their claws out by Game 2.

Despite the early loss, manager Kim Tae-hyung and catcher Yang Eui-ji didn’t show much concern for the hitters’ performances. They were proven right in Game 2: the Bears broke the scoreless tie and added a run of their own at the bottom of the third inning. In the fourth, Kim Jae-hwan got a two-base hit and Yang added an RBI. Choi Joo-hwan later added a two-run home run to end the inning at 4-0.

The Wyverns picked up three runs over the next three innings, closing in on the Bears, but three additional runs in the eighth sealed the deal for Doosan. Choi has been a standout star for the Bears in these first two games of the Korean Series, batting a .714 average with six RBIs and a single home run.

“Our starter [Frankoff] shut down their hitters, and we got some production from the middle of our lineup,” Kim was quoted as saying on Yonhap. “There’s a huge difference between going on the road tied at 1-1 and trailing 2-0.”

Seth Frankoff, the pitcher who led the league during the regular season, protected his title in picking up his first win in the Korean Series, giving up three runs in six and two thirds of an inning with a 1.35 ERA. Frankoff had a record 10 strikeouts and made his personal best of 117 pitches throughout the game, a feat worthy of being named MVP.

“It was an exciting game, and we did what we came out to do tonight,” Frankoff was quoted as saying on Yonhap. “I was basically out of gas, and I’d thrown a lot of pitches. Thankfully, Chi-guk got the last out and got us out of the inning.”

The Wyverns’ starter Moon Seung-won had to take a loss after giving up six hits and four runs in five innings with a 7.20 ERA.

In the regular season, both teams’ head-to-head record is tied at eight wins and eight losses. But when looking at the their all-time Korean Series record, the Wyverns are well ahead with 11 wins and five losses.

The Bears will start Lee Yong-chan in today’s game, while the Wyverns will start Merill Kelly.

Lee has played in three Korean Series with the Bears - 2008, 2016 and 2017 - as a bullpen pitcher. In three Korean Series, Lee has proven to be a strong player with a 1.86 ERA and one save in seven games. This season, Lee finished strong as a starter, picking up 15 wins and three losses with a 3.63 ERA.

Kelly has been the Wyverns’ ace pitcher this season, picking up 12 wins and seven losses with a 4.09 ERA. In the playoffs, Kelly made two appearances, one as a starter and another as a relief pitcher. In Game 2 of the Playoffs, Kelly had a no decision game as he left the mound after tossing four scoreless innings. Then, in Game 5, Kelly appeared in the bullpen and picked up a hold, despite a 10.13 ERA in two and two thirds of an inning.

Of the 10 KBO teams, the Wyverns play in the smallest stadium, a fact likely to pose a challenge to the pitchers. The Wyverns tend to use this to their advantage, topping the league’s home runs at 233. As a result, the Bears’ pitchers often struggle at Munhak, having the highest ERA at 7.18.