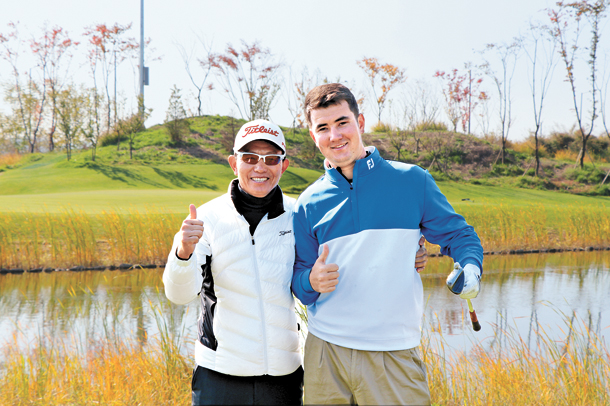 Kang Wook-soon, left, and Kanatbek Kurbanaliev pose for a photo at KWS Academy in Ansan, Gyeonggi on Thursday. [KIM EUI-JIN]

In the late 1990s, Kang Wook-soon dominated the Asian Tour with seven victories, spreading his name far and wide across the continent. Twenty years later, Kanatbek Kurbanaliev of Uzbekistan hopes to add his name to the list of prominent golfers in Asia.

Having gone professional after the 2018 Asian Games in Jakarta, Kurbanaliev spent the first month of the offseason in Korea in order to receive special short game instruction from Kang.

Although Uzbekistan is famous throughout Asia for such sports as football, judo and boxing, the country is virtually unknown when it comes to golf. In fact, it wasn’t until 2015 that it established its golf federation.

“When I saw his swing the first day he came, he had the basics of the mechanics,” Kang said. “But he didn’t have organized theory of golf academically. So seeing his body movement, I gave him directions as to how he should train. But all the decisions were his.”

In a country that possesses a single golf course and has 50 golfers registered under the International Golf Federation, Kurbanaliev came late to the sport at the age of 18 having worked at the course as a caddie.

“I heard that there’s a job at a practice range,” said Kurbanaliev. “In a short period of time, I learned a lot and from that, I thought it wouldn’t be too bad if I started playing the sport. At the time, I was only allowed to play and practice at the range when the course was closed.”

Due to such limited practice time, Kurbanaliev decided to further expand his career in Kazakhstan, having discovered that golf courses in Kazakhstan allowed caddies to work and play golf as much as they want. Though he was registered as a caddy, he spent more time playing and practicing.

“They have much nicer facilities for golfers and by getting to play a lot, I improved a lot,” Kurbanaliev said. “When I returned to Uzbekistan, that’s when the country established the golf association.”

Once Uzbekistan established its golf association in 2015, things really began to change.

“At the time, there weren’t that many good golfers so I was a notable player,” Kurbanaliev said. “And the association offered me a chance to work with them. By joining the association, I received sponsorship.”

“Jakarta had an amazing condition,” Kurbanaliev said. “They had great short game facility, putting green and it was just different. So after the Games, I had a lot of thoughts. To continue my career as a professional, I needed to be in this kind of a facility so I came to Korea right after the Asian Games.”

However, after the Asian Games, Kurbanaliev was told that a close friend of his had gotten in touch with Kang and that he would be able to learn from him for a month in Korea.

“When I teach him one thing, he understands two and three more things,” Kang said. “I’ve only taught him for a month but compared to other players, he learned as much as what the others would learn in a year.”

“I improved a lot,” Kurbanaliev said. “I was making par saves from a lot of areas where I thought I couldn’t in the past.”

Although he still doesn’t have his schedule for the upcoming season, Kurbanaliev hopes to earn his status card on the KPGA Tour.

“When we think of Korean golfer in the United States, there’s K.J. Choi,” Kurbanaliev said. “And in Asia, there’s Kang. I don’t have big ambitions, but my long term goal in this career is for people to think of my name at least in golf in Asia, when they think of golf in Uzbekistan.”