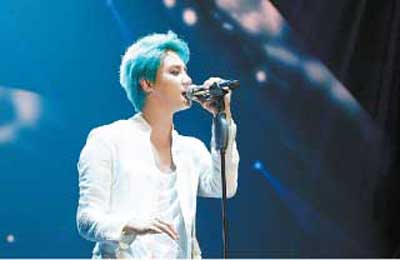 Kim Jun-su from boy band JYJ is holding a series of concerts at the end of the year to meet with his fans after being away for his military service.

According to C-JeS Entertainment on Tuesday, Kim will hold his “2018 Way Back Xia Concert” for three days, from Nov. 30 to Dec. 2, at Jamsil Arena in the Jamsil Sports Complex, southern Seoul.

“The upcoming concerts will be a reward to those who have been waiting for Kim’s return for a long time,” the agency said. “He will be singing songs off of his first to fourth solo albums.”

The announcement comes only a day after Kim was discharged from his 21-month military duty as a conscripted officer with the Suwon police on Monday. Hundreds of fans and the press waited for him in front of the Gyeonggi Nambu Provincial Police Agency.

“I do wish to rest and travel, but I want to meet my fans first,” he said at the site. “I know how they must have felt waiting such a long time for me.”

The singer debuted in 2004 as a member of boy band TVXQ, but left the group in 2010 along with members Park Yoo-chun and Kim Jae-joong to form the group JYJ. Kim has also been pursuing a career as a solo artist, starring in popular musicals “Dracula” (2016) and “Dorian Gray” (2016). Kim will also be holding a private fan meeting today, according to his agency.