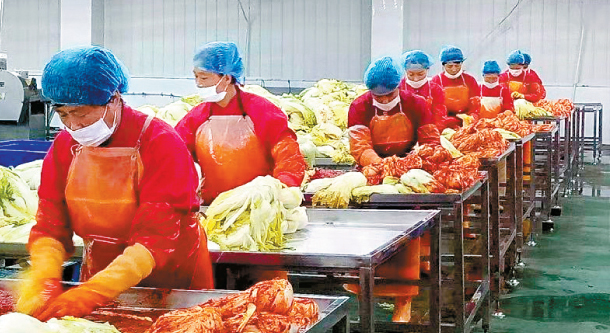 Eight automated production lines at a kimchi factory churn out Korea’s spicy fermented cabbage staple with impressive efficiency, seasoning them with copious amounts of vitamins and ground chili pepper. The factory boasts 21 different kimchi products, and manufactures a total of 21,000 tons (46.3 million pounds) of the pickled cabbage every year.

“Though kimchi of Korean origin was popular in Japan until a few years ago, now Japanese kimchi is all the rage,” said CEO Hajime Oyama, in discussing Japan’s $700-million kimchi market. “From next year, we plan to enter the Korean market with our kimchi specially designed to satisfy young people’s palates.”

Fond of experimenting with various ingredients, Oyama uses persimmon and apple extract to add extra sweetness to Miyama’s kimchi. The resulting flavors, which moderate the spiciness, are intended to appeal to younger consumers. 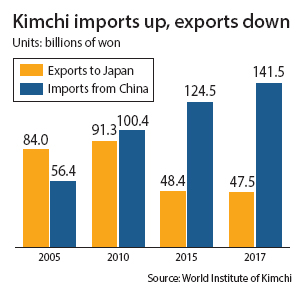 “We also add natto [fermented soybeans] and cheese to our kimchi,” added Oyama.

Kimchi exports to Japan have been on a steady decline since 2010 as companies like Miyama have crowded out Korean competitors.

From the early 2000s, the Korean government embarked on the so-called ‘kimchi globalization project’ after successfully thwarting Tokyo’s efforts to register “kimuchi”, the Japanese spelling, in the UN’s Food Code.

But while kimchi itself has since reached worldwide fame, gracing the tables of Michelin-starred restaurants and becoming a key ingredient in dishes at popular American taco joints, Korea’s kimchi trade deficit has been steadily widening.

Today, it’s no surprise to walk into a local Korean restaurant and have Chinese kimchi served in favor of their much more expensive domestic alternatives.

Not only is China a large producer of key kimchi ingredients, like napa cabbage, radish, onion and ginger, but cheap labor helps bring production costs down dramatically. A Chinese employer spends easily 30,000 won per worker per day less when compared to their Korean and Japanese competitors.

Chinese kimchi manufacturer Tongren Food produces 20,000 tons of kimchi at its 35,000 square meter (376,737 square feet) facility in Qingdao every year. It strictly adheres to government food safety standards, with the facility fully equipped with a water waste management system and quality control labs that check for pesticides in the cabbage.

So far this year, Tongren has exported 10,000 tons of kimchi to Korea. The rest of its kimchi is sold off to Malaysia and Cambodia, or to other parts of China for domestic consumption.

“We export 10 kilograms of kimchi for under 10,000 won to Korea,” said Song Lixian, the CEO of Tongren Food.

Tongren’s kimchi sells for around one-tenth of price charged by the average Korean supermarket, where 1 kilogram of the pickled cabbage goes for 10,000 won.

“As kimchi is gaining popularity with Chinese locals, we’ve sold a lot of our products to Tianjin and Beijing. In the future, we want to increase exports to Southeast Asia and Europe,” said Song.

While international factors like cheap Chinese imports and kimchi production in Japan contribute to the growing kimchi trade deficit, domestic policies that bar conglomerates from entering and innovating in the industry are also a cause of concern.

Certain characteristics of kimchi make it a difficult product to export. Volatile napa cabbage prices, for example, forced Daesang to halt sales of its famous Jongga kimchi brand in September.

“There needs to be agricultural research on maintaining steady levels of cabbage supply as well as scientific research on quality assurance,” said Chairman Ha Jae-ho of the World Institute of Kimchi, a government-funded institute under the Ministry of Science and ICT.

Because kimchi tends to ferment quicker in higher temperature, it’s easy for flavors to change in transit to export destinations. If kimchi becomes too fermented, its pungent and acidic smells - which strengthen with time - can drive away potential customers.

“When kimchi becomes too ripe from long travel time, the Chinese locals think it has gone bad,” said Choi Min-gyu, who sells kimchi wholesale at Qingdao.

Japanese companies like Miyama are already experimenting with additives like vitamins to control the acidity and fermentation speed of kimchi. Delaying fermentation and suppressing pungent odors is key to boosting exports to faraway destinations like North America, where it takes a month for kimchi exports from Asia to arrive.

Though large food companies may be best suited to research and develop innovative processing and distribution methods, in Korea, government regulations bar and penalize them from expanding their kimchi businesses.

The kimchi industry is currently regarded as suitable for small and medium-sized enterprises (SMEs), meaning that conglomerates are discouraged from expanding production or acquiring or starting a new Kimchi businesses.

With regulations strengthening from next month, conglomerates that expand into the market may face up to 150 million won in fines and be required to forfeit up to 5 percent of the total revenues made from kimchi sales.

“For kimchi to go global, we need scientific research, including the study of bacteria as well as the development of new refrigeration and transportation technology,” said a spokesman from food giant CJ Cheiljedang. “But strict government policies may hinder conglomerates from such research and development.”