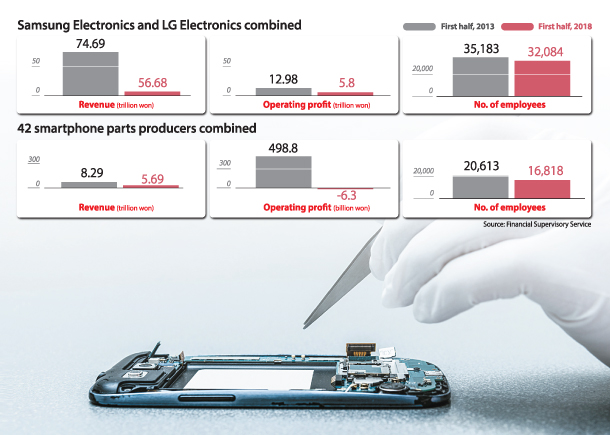 Korea’s smartphone parts industry has been in decline. Squeezed by price-competitive Chinese producers and a saturated market, it is losing sales and workers. The difficulties faced by suppliers just add to Korea’s manufacturing concerns, as profits slump at automobile companies and as the semiconductor supercycle seems to be coming to an end.

An analysis published on Nov. 4 by the JoongAng Ilbo based on responses from 42 locally-listed smartphone parts producers indicates over 3,700 jobs and 2.6 trillion won ($2.3 billion) in revenue have been lost in the business over the past five years. The analysis compared financial statements issued in the first half of 2013 with those from the first half of 2018 by producers of smartphone covers, cameras, circuit boards and touch screens.

Combined revenue for the 42 firms in the first half in 2018 stood at 5.69 trillion won, down 31.4 percent over the past five years from 8.29 trillion won. Twenty-six of them, or 61.9 percent, reported a drop in revenue over that time. Combined operating profit at the 42 companies collapsed, falling from 497.8 trillion won five years ago to a loss of 6.3 trillion won in the first half of this year. Net margins for the group was negative 0.11 percent. Nineteen of the companies, or 45.2 percent, are reporting operating losses.

The trend is in line with the results at major electronics companies. LG Electronics’ mobile communications division has been reporting operating losses for four consecutive years.

Smartphone components producers have faced significant job losses, with total employment falling from 20,613 to 16,818. Only four companies, or 9.5 percent of those surveyed, reported a rise in revenue, operating profit and jobs over the five-year period.

SMAC, a Kosdaq-listed supplier for Samsung Electronics of touchscreen modules for smartphones, recorded 26.5 billion won in revenue in the first half. That is about 10 percent of the revenue it posted in the first half of 2013. Operating loss for the first six months of this year was 5.8 trillion won.

“Our earnings results were challenged as the average period in which people switch smartphones lengthened from two to three years and technological changes came quickly,” said an executive at the company.

People & Telecommunication, another Kosdaq-listed manufacturer, was the victim of embezzlement by its majority shareholder of as much as 20 billion won last month. Once the country’s leading phone cover producer, it is now suspended from trading on the exchange.

Experts say that local smartphone producers failed in solidifying their position as the market stagnated.

According to Strategy Analytics, smartphones shipments will total 1.48 billion units this year globally, retreating for the first time since 2007, the year Apple introduced its first smartphone. Samsung is projected to ship 298.5 million smartphones this year, according to the market researcher, registering a figure below 300 million for the first time since 2013. LG Electronics is facing weakness except in North America.

Even though smartphones are adding more cameras - two or three at least - smaller players in Korea are pressed to keep innovating.

“Even before we have finished depreciating production facilities, we have to invest again in new facilities,” said an executive at a camera module producer. “Profitability is feared to be damaged.”

Samsung Electronics is having Chinese manufacturers assemble its medium and low-cost models for the Chinese market, with the goal of maintaining its global smartphone market share of 20.2 percent.

Samsung is scheduled to release Galaxy A6s this month in China, which has been developed and produced by Wintech, a Chinese company.

“Even though Samsung said that the Chinese-manufactured models are only for the Chinese market, it means parts made by China will naturally increase,” said an executive at one of the parts producers.

Smartphone parts makers are trying to find new business or diversify their supply channels. Kim Hak-kwon, CEO of Jaeyoung Solutec, a smartphone camera optical components maker, says he has pinned hopes on the resumption of operations at the Kaesong Industrial Complex. The components require sophisticated manual labor, and using skilled North Koreans is seen to improve the situation.

Others are looking towards developments on the software side of the business.

“Smartphone Cinderellas - software-based start-ups - are supposed to be a breath of fresh air for the industry,” said Sohn Dong-won, professor of business administration at Inha University.