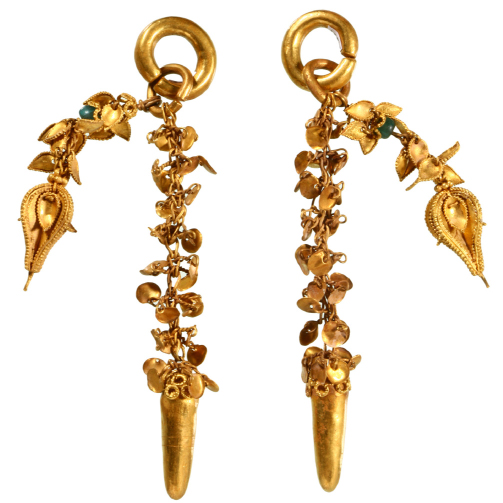 Two pair of Baekje earrings were excavated from the Royal Tomb of King Muryeong in Gongju, South Chungcheong.

Eight round ornaments are connected with a small ring to the end of the long strip, and a bullet-shaped ornament is attached to the bottom.

The bullet-shaped ornament was also found from remains of the Goguryeo Dynasty (37 B.C.-A.D. 668) but those of Baekje are rarer and more unique in shape.

They have been regarded as important sources for studying Baekje, particularly the culture and customs of the ancient kingdom. Among them, jiseok, a slab of stone inscribed with the deceased’s date of birth and death together with his achievements, reveals the exact owner of the tomb and the exact date of construction.