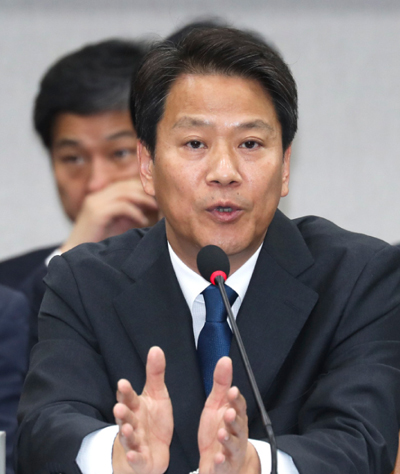 Im Jong-seok, President Moon Jae-in’s chief of staff, was criticized by the opposition during a parliamentary audit of the Blue House on Tuesday for his recent trip to a military installation to monitor a landmine removal operation last month.

They accused Im of trying to raise his political profile by drawing the media spotlight.

The chief of staff wore sunglasses that day, which could be seen as arrogant, further inflaming the opposition’s criticism.

A video clip of Im’s trip revealed the location of an entrance to a guard post on the southern side of the demilitarized zone. The disclosure of sensitive military information also fueled criticism of Im, who also serves as chairman of the committee on implementing inter-Korean agreements signed on April 27 and Sept. 19 by President Moon and North Korean leader Kim Jong-un.

“Im just answered an inquiry from Rep. Son Kum-ju that he make the visit [to the frontline unit] as chairman of the inter-Korean agreement implementation committee, [not as the president’s chief of staff]. But it is his duty as a chief of staff to stay at the Blue House when the president is absent,” said Kim Sung-tae, the floor leader of the LKP. Moon was on a nine-day trip to Europe when Im went to inspect the landmine removal operation.

Kim continued that if Im had to make the visit as head of the special-purpose committee, he should have done it after Moon returned home from Europe.

Fellow LKP lawmaker Sung Il-jong joined the chorus, saying it “wasn’t appropriate for the unification minister, national intelligence service chief and defense minister and vice minister to make a group tour to the demilitarized zone” while the president was overseas.

The visit by the high-level delegation led by Im was meant to show Seoul’s resolve to fulfill the inter-Korean agreement signed on Sept. 19 in Pyongyang. In the Pyongyang Declaration, the two agreed to “expand the cessation of military hostilities in regions of confrontation such as the DMZ to the substantial removal of the danger of war across the entire Korean Peninsula.”

Specifically, the North and South agreed to excavate the remains of soldiers killed during the 1950-53 Korean War.

Removing landmines that were planted during the three-year war was the first step to the excavation project along the border.

In his response to the criticism, Im talked about the significance of the excavation.

“The [agreement implementation] committee decided to make the visit because the remains excavation project is one of the most meaningful projects envisioned in the inter-Korean agreement,” he said.

On criticism that he was seeking to score political points, Im said he would take it “as an occasion to recognize the heavy responsibility” of his position as a senior presidential official.