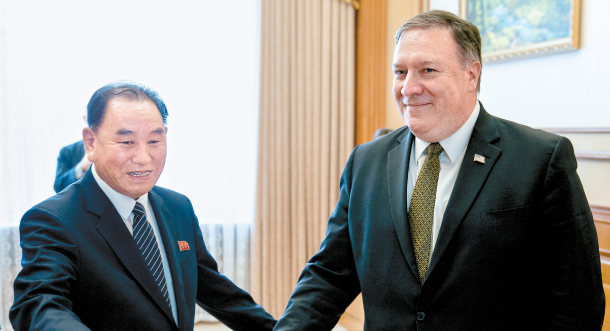 The State Department said in a statement that Pompeo will travel to New York with Stephen Biegun, the U.S. special representative for North Korea, to meet Kim, the vice chairman of the Central Committee of the North’s ruling Workers’ Party.

It added that Pompeo and Kim “will discuss making progress on all four pillars of the Singapore Summit joint statement, including achieving the final, fully verified denuclearization of the DPRK.”

DPRK is an acronym for the North’s official name, the Democratic People’s Republic of Korea.

North Korean leader Kim Jong-un and U.S. President Donald Trump during a summit in Singapore on June 12 signed a four-point joint statement which called for: establishing new North-U.S. relations; building a lasting and stable peace regime on the Korean Peninsula; committing to complete denuclearization; and the repatriation of bodies of American soldiers killed during the 1950-53 Korean War.

Pompeo, in his fourth visit to Pyongyang on Oct. 7, met with Kim Jong-un in part to discuss a second North-U.S. summit. Kim told Pompeo he was ready to allow international inspectors into the North’s Punggye-ri nuclear test site and its Tongchang-ri missile engine testing site.

They also agreed to hold lower level denuclearization talks that would involve Biegun and his counterpart, North Korean Vice Foreign Minister Choe Son-hui, but they have yet to happen.

There is a likelihood that Choe could accompany Kim Yong-chol, who also serves as the director of the North’s United Front Department, which handles inter-Korean relations, to New York and meet with Biegun.

“Biegun is accompanying Pompeo, which could indicate a high possibility that his counterpart Choe Son-hui may attend as well,” said Kim Eui-kyeom, the Blue House spokesman, Tuesday.

In a briefing in Seoul on Tuesday, the Blue House spokesman called attention to the U.S. State Department’s statement saying the high-level talks with the North will focus on the “four pillars” of the Singapore joint statement, which he praised as “the most stable approach.”

“Until now, clauses three and four on denuclearization and the repatriation of bodies have been prioritized in discussions,” said Kim. “I can’t help but think that the first and second clauses on establishing North-U.S. relations and bringing about peace on the Korean Peninsula can be officially be negotiated through the upcoming high level talks.”

With Kim Jong-un’s pledges on inspections and possible dismantlement of its Yongbyon site, attention is focused on what Washington will offer in terms of security guarantees for the North.

Pyongyang has been pushing for sanctions relief while Washington has maintained that the easing of pressure will come after denuclearization.

Another factor includes the results of the U.S. midterm elections Tuesday.

Spokesman Kim Eui-kyeom noted, “There is a possibility that a new approach on North-U.S. negotiations may be taken depending on a new atmosphere and circumstances following the U.S. midterm elections.”

Kim Yong-chol last traveled to New York for talks with Pompeo at the end of May. They then headed to Washington to deliver to U.S. President Donald Trump a letter from Kim Jong-un that set back into motion the first North-U.S. summit on June 12.

There is little likelihood that Pompeo’s talks with Kim Yong-chol Thursday in New York can be extended because a U.S.-China Diplomatic and Security Dialogue is scheduled for Friday. Pompeo and U.S. Defense Secretary Jim Mattis will hold talks in Washington with Yang Jiechi, a Chinese politburo member who heads the ruling Communist Party’s foreign affairs commission, and China’s Defense Minister Wei Fenghe.

“We plan to have consultations between South Korea and the United States on the results of the North-U.S. talks,” said Kim Deuk-hwan, deputy spokesman for the South Korean Ministry of Foreign Affairs, during a briefing Tuesday. Seoul is also considering sending an official to Washington, such as Lee Do-hoon, the South’s special representative for Korean Peninsula peace and security affairs.

Pompeo told CBS’s “Face the Nation” on Sunday that “our capacity to verify” that complete denuclearization has taken place “is also a prerequisite to lifting economic sanctions.”

He said he expects to “make some real progress including an effort to make sure that the summit between our two leaders can take place where we can make substantial steps towards denuclearization.”

Pompeo added, “I’m confident that we’ll advance the ball again this week” in his talks in New York.

In another interview with “Fox News Sunday,” Pompeo said he is “not worried about rhetoric” coming from Pyongyang during the negotiation process. “Stray voltage happens to be all around us,” said Pompeo. “We’re very focused. We know with whom we’re negotiating. We know what their positions are.”

He maintained that Trump has been clear that there will be “no economic relief until we have achieved our ultimate objective.”

He underscored that the negotiations aim to achieve “the full denuclearization verified by the United States of the Korean Peninsula, and then a brighter future for the North Korean people.”