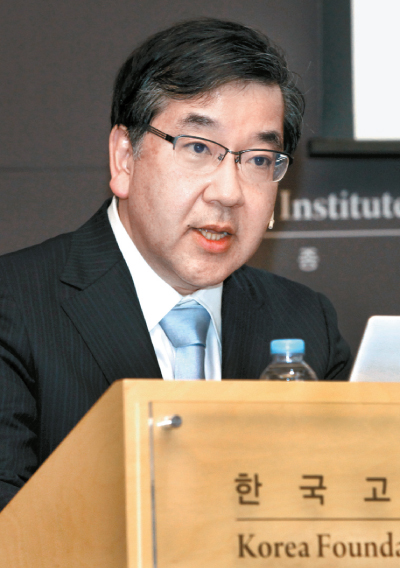 Tokyo University President Makoto Gonokami gives a speech at a conference hosted by the Chey Institute for Advanced Studies in southern Seoul on Monday. [PARK SANG-MOON]

More universities should cooperate with businesses and government to help communities, Tokyo University President Makoto Gonokami said at a conference hosted by the Chey Institute for Advanced Studies in southern Seoul on Monday.

“I believe that academia is key player in creating a better future society,” Gonokami said in his lecture introducing Tokyo University’s Future Society Initiative (FSI) at the Korea Foundation for Advanced Studies in southern Seoul Monday. “The University of Tokyo launched the Future Society Initiative in 2017, after the United Nations proposed the 17 Sustainable Development Goals. The two have much in common. The aim of the FSI is to use science and innovation to achieve the sustainable development goals across all sectors - sciences, engineering, humanities, social sciences and more.”

The university has around 180 ongoing projects that professors, students, start-ups and government bodies are working on, Gonokami said.

One example is a project to install solar lanterns in Tanzania. Research at the university led to the creation of Digital Grid, a Tokyo-based nonprofit company in 2011. It has been providing solar lanterns to rural areas in Africa while working with some corporate and government entities.

“The school of engineering is providing electricity to Tanzania via solar lanterns composed of battery and solar panel,” he said. “They are already supplying electricity to about 240,000 people. Their business in enabled by new information technology and also a mobile money payment system. With these solar lanterns people can work and study during the night.” The university has at least one project that addressed each of the 17 Sustainable Development Goals of the UN.

But it has not been easy for the university to stretch beyond its normal capacity of research and teaching to implement projects in local communities, Gonokami added. He announced a plan called Vision 2020 in 2015, which calls for the university to depart from conventional roles and to be a global platform for research and education that directly benefit communities.

“I found out after some 30 years of my time in this field that the most important thing is to listen, persuade and explain,” he said. “After announcing Vision 2020, I visited meetings of all of the university’s 26 departments to explain this plan and it took three months.

“Three years after that, I did a second round of visits [to the departments] and it took three months again,” he said. “This time it was to explain the progress made under the plan and why we are doing things in a certain way.”

He is hoping for further cooperation with other universities in Korea.

“International cooperation among universities, particularly between Japan and Korea, is very important,” he said. “Korea and Japan are advanced countries that share East Asian culture, upon which we can strengthen our collaboration for a more sustainable world.”