When Doosan Bears right-hander Josh Lindblom started Game 1 of the Korean Series against the SK Wyverns on Sunday, he didn’t just make his first appearance since his final regular season start on Sept. 21. 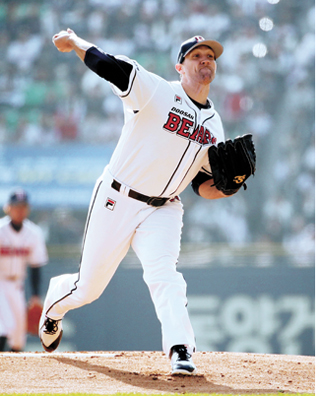 Josh Lindblom of the Doosan Bears throws a pitch during Game 1 of the Korean Series against the SK Wyverns at Jamsil Baseball Stadium in southern Seoul on Sunday. [YONHAP]

The American right-hander came back with a new kink to his delivery.

Lindblom introduced a slight pause at the top of his pitching motion, with an extra kick with his left leg before landing. And he only did so when he was pitching from the windup position. When he was pitching out of the stretch with runners on base, Lindblom went back to his prior delivery without any hesitation in his motion.

It may seem a bit risky for a pitcher to make mechanical changes before a championship game, but Lindblom had plenty of time to work on his new delivery. As the Bears clinched first place in the regular season and a spot in the Korean Series in September, they could afford to rest Lindblom from late September on so he might do whatever he needed to do at his own pace.

Lindblom, who led the Korea Baseball Organization (KBO) regular season with a 2.88 ERA, said he made the change with the sole purpose of trying to get better.

“Throughout the latter part of the season, my direction and timing was a little off. I was getting a little too quick to the plate,” Lindblom told Yonhap News Agency before Game 2 at Jamsil Stadium in Seoul. “[The pause] allows me to stay back on my back side and to get my direction a little better. That’s really all I was thinking about.”

Lindblom said he was inspired to make the alteration after watching major league pitchers in action during their postseason, citing Clayton Kershaw and Kenley Jansen of the Los Angeles Dodgers and David Price of the Boston Red Sox.

Lindblom said he had “45 days to work on it.” He said he did some dry work in front of a mirror first before trying the new delivery in multiple bullpen sessions and live batting practices.

Lindblom said it only took him “two or three times” to feel comfortable with his change.

“Pitchers are athletes. A lot of people don’t think we are,” Lindblom said with a smile. “I think knowing the purpose and the reason why you’re doing it also is important. It’s not just to make my delivery look good or look different. The purpose is to keep my weight on my back side and to get my direction. As long as the purpose is in mind, I think it’s easy to do.”

Unfortunately for Lindblom and the Bears, the new delivery didn’t produce the desired result. Lindblom took a loss in the Bears’ 7-3 defeat in Game 1, after he gave up five earned runs on six hits in 6 and one third innings.

Two of those hits were two-run homers by Han Dong-min and Park Jung-kwon. Han’s shot came in the top of the first inning and put the Wyverns ahead 2-0. The Bears later rallied to take a 3-2 lead into the sixth inning, before Park’s blast put the Wyverns back on top by 4-3.

Lindblom walked a batter before both of those homers, something he said was “unacceptable.”

“I just didn’t execute pitches,” he said. “I can live with the home run. I didn’t throw the ball where I wanted to and two really good hitters put good swings on balls and hammered it out of the park. But walks are unacceptable, especially when the team gets the lead back.”

Lindblom said he is line to start Game 5 tomorrow on four days’ rest, but said he could pitch in relief if or when the Bears need him.