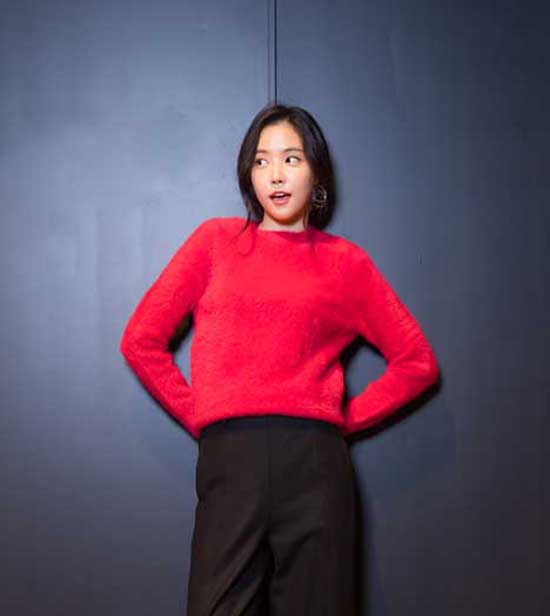 Twenty-four-year-old Son Na-eun has jumped from pop star to actor in the “The Wrath,” her first lead role on the big screen, and just like that, she’s on her toes again. And while it’s not uncommon for a singer to dabble in acting these days, many in the film industry are surprised that the Apink member has chosen a horror movie for her first big role.

The remake of the 1986 film revolves around Ok-bun, played by Son, who steps into a mysterious mansion where a series of unknown deaths have been occurring in the Joseon (1392-1910) era. After Ok-bun learns the rules of the house from Mistress Shin (Seo Young-hee), the young maiden learns the secrets of the mansion and must protect herself from the dangers that lurk inside.

“I filmed the movie as actor Son Na-eun, not singer Son Na-eun,” said Son. “I tried not to think about people’s reactions, but honestly it’s really hard not to care. I felt like I was representing the members [of Apink], and so I had to do well.”

In an interview with Ilgan Sports, an affiliate of the Korea JoongAng Daily, Son shared her thoughts and hopes for her new career. The following are edited excerpts.

Q. This is your first lead role in a movie. How did it feel when you landed the role?

A. The idea of being the lead felt a little burdensome. I’ve never played a lead character before, even for a drama. It was hard to be the lead for a whole movie from the beginning to the end. I’ve always watched more experienced actors do it. So I talked to the director and planned everything out. But it turned out to be more difficult to act when I was thinking everything through.

How do you feel now?

I’m so nervous that I can’t even sleep. I’m so worried, since it’s my first film and I don’t know how it’s going to look to the audience. It feels so much more tense than having an album out. I’ve been in a movie before, but that was when I was much younger and I had no idea what was going on. I can’t quite remember what it felt like. But now that I know what’s going on, it feels so much scarier.

Because it’s a horror movie, you were required to wear special effects makeup for the gory scenes. What was that like?

As a singer, I only get to do pretty things, and I wanted to let go of that - at least while I’m acting. So it was a big step for me, and I needed some courage, but I wasn’t worried. I actually wanted to wear the special effects makeup more than the normal makeup. In fact, I wore almost no makeup [throughout the movie]. I even hoped that people would watch the movie and say, “That’s Son Na-eun?”

What have the other members of Apink said about it?

We were preparing for a concert while I was shooting the movie. So I really didn’t get much time to talk to them. I would [finish shooting and] then meet up with them to practice [for the concert]. It really helped me a lot to chat and laugh with them in between.

Another member from Apink, Jeong Eun-ji, is also shooting a horror movie, named “0.0MHz.” Do you know how that’s going?

I’ve heard that they’ve finished shooting. The movie’s actually from the same production company, and so we talked a lot about our movies. But the genre is so different, and her movie is set in the summer while mine’s in the winter. We’ve both been through our share of tough times, her and I.

Do you think singing and acting are different?

For me, I’ve been singing for quite some time now. I enjoy the things I do as a singer because I’m so used to it and I can rely on the other members. But for acting, it feels like I’ve gone back to the beginning. It’s a chance for me to learn.

How did you first start acting?

I started off as a singing trainee [at my agency], then I was suddenly put on the acting team. It wasn’t my choice, but a call made by the agency. Later, I was added to Apink. I was starting to think that I’d like to be an actor when I was suddenly told to be a singer. It was confusing.

Do you have any role models?

People like Suzy and Im Si-wan have transitioned well from singers to actors. They paved the way, and I’m following that path. They are doing so well, even as well as people who started off as actors. For me, I think I’ve really started my life as an actor with “The Wrath.” I’ve got a long way to go compared to them, and I want to learn from them. I’m amazed at how much they worked to get to where they are now, and at the same time, hope that I can do so, too.

Are there other things you’d like to try as well?

I’d like to try a romance flick. But I’m worried about whether I can actually pull it off. It looks so adorable to watch those kinds of romantic scenes on television, but would I actually be able to get [the emotions] across when the time comes? I think I could try, but I’m worried. I think I would have to start with being in love first to express love. But if the chance comes, I’d like to try.