Celeb Five to return with ‘Shutter’

Celeb Five to return with ‘Shutter’ 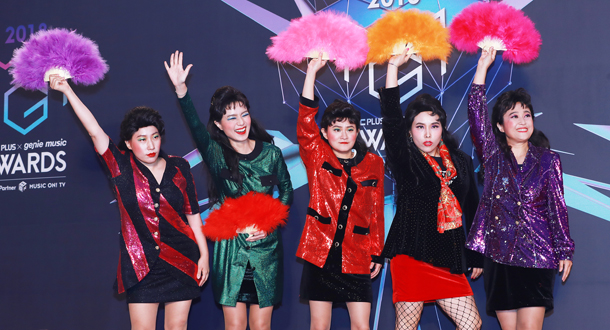 Comedy girl group Celeb Five is returning with a new single this month.

According to member Song Eun-yi’s agency FNC Entertainment, the group will release the disco song “Shutter” on Nov. 19. The song reportedly has more difficult dance moves than their debut song, “I Wanna Be a Celeb.”

The upcoming song was written by member Kim Shin-young and produced by singer Muzie.

The group was first formed in January with five female comedians - Song Eun-yi, Kim Shin-young, Kim Yeong-hui, Shin Bong-sun and Ahn Young-mi - following their appearance on a web series on Vivo TV. The group released their first song “I Wanna Be a Celeb” in January. The song is a remake of a performance of Yoko Oginome’s 1985 hit “Dancing Hero.”

The group won the Discovery of the Year award at the 2018 MBC Plus X Genie Music Awards (MGA) held at Namdong Gymnasium in Incheon on Tuesday.