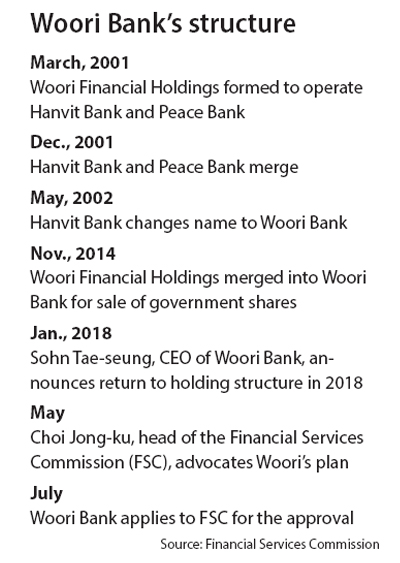 On Wednesday, Korea’s financial regulator approved Woori Bank’s plan to convert itself into a holding company, enabling the institution to revert back to its earlier structure.

“The holding unit will be formed through a transfer of stock ownership in January next year,” it added.

The bank will hold an extraordinary board meeting today to determine the leadership and the specific structure of its new holding unit.

The general framework will be disclosed during the board meeting on Thursday, and “we are aiming to decide the details before Nov. 23,” said a Woori Bank spokesperson.

Multiple media outlets reported that Sohn Tae-seung, CEO of Woori Bank, will act as the head of the holding unit for one year to navigate the early phase in the development of governance structure.

The CEO has vowed to push the conversion forward, saying that it is necessary to turn Woori into a more comprehensive financial services group.

The board of directors passed the proposal in June following the submission of an application to the FSC.

Woori, which is 18.5 percent owned by the government, is the only major bank in Korea without a holding company. KB Kookmin, Shinhan, KEB Hana and NH Nonghyup have all structured themselves in this way. But Woori, the country’s third largest bank, was the first to establish a holding company nearly two decades ago.

Woori Finance Holdings was formed in April 2001 with the Korea Deposit Insurance Corporation owning a 100 percent of the stock. The subsidiaries included Hanvit Bank, the predecessor of Woori Bank. The holding structure was dissolved in 2014 in the process of the government trying to privatize the company and sell the insurance and securities units.

The holding group will also control another 16 subsidiaries of affiliates, including Woori Card and Woori Investment Bank.