PARK HYUN-YOUNG
The author is global economic team head of the JoongAng Ilbo. 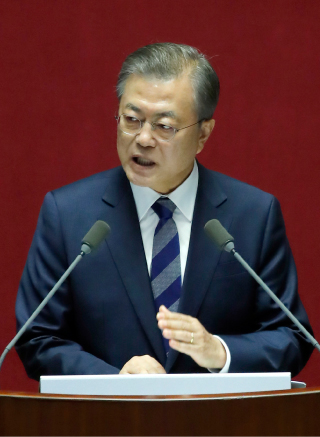 In a speech at the National Assembly on Nov. 1, President Moon Jae-in reiterated his commitment to push the controversial income-led growth policy next year. [JOINT PRESS CORPS]

On Nov. 1, Amazon increased the minimum wage for its employees in the United States to $15 an hour. This applies to its 250,000 full-time employees and 100,000 temporary employees hired for the holiday season. The voluntary wage increase of the company is different in nature from the government-enforced minimum wage hikes in Korea. Amazon had to pay more to fill the needed positions, although it has been frequently criticized for paying wages that are too low.

American companies are short-handed. As an economic boom increases jobs, there is a shortage of skilled workers. Companies are competing to hire, and naturally wages goes up. After Amazon, Walmart and Starbucks also announced plans for wage increases. The trend is spreading across the retail industry.

The October jobs report by the U.S. Department of Labor showed that 250,000 jobs were added in America. The unemployment rate is 3.7 percent, nearly on par with the full-employment level. The lowest jobless rate in the United States since 1969 has been maintained for two months in a row. The unemployment rate has been falling little by little, but the problem was that the wage level that did not move. No economist or central banker could explain exactly why employment numbers were improving but the wage did not rise as expected. Former Federal Reserve Chair Janet Yellen called it a mystery.

Amazon’s case shows that after a long wait, wages have started to move. In the third quarter, wages in the United States increased by 3.1 percent. It is the biggest increase in 10 years since a 3.1 percent hike in the second quarter of 2008. It was a belated confirmation of the fact that as the economy grows, wages will eventually rise, albeit slowly.

The fundamental difference is where income increases first. Trump advocates a “trickle down” economy, offering tax cuts to corporations and the wealthy and encouraging corporate growth for long-term benefits to businesses and consumers. His administration has been criticized for benefiting rich Americans and companies, but it has resulted in full employment and wage increases.

Meanwhile, President Moon and the government is experimenting with the “trickle up” theory to increase low-wage earner incomes to boost domestic demand and production. As report cards are announced every month, I compare them constantly. How long will Koreans maintain hope that a bright future awaits us?