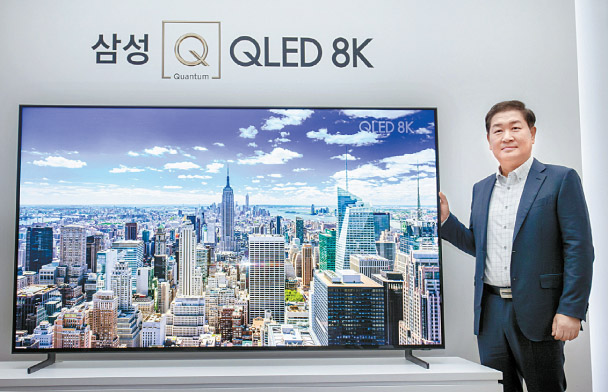 Han Jong-hee, Samsung Electronics’ president and head of the visual display business, poises next to a QLED 8K TV at a press event in Banpo, Seocho District, southern Seoul on Wednesday. [SAMSUNG ELECTRONICS]

The prices run from 7 million won ($6,250) to 26 million won per unit, according to size. The company started accepting orders for the model in Korea in late October.

“Premium products make up around 15 percent [of all television sales in Korea] and we expect the QLED 8K’s market share to rapidly reach that level,” Han Jong-hee, the company’s president and head of the visual display business, told local reporters Wednesday in Banpo, Seocho District, southern Seoul.

The same television started sales in Europe in September and in the United States in early October. Han said European customers liked all four sizes while Korean customers preferred the larger screens.

A preference for larger screens and higher definition, according to Han, is a plus for the QLED 8K.

“Around 82 percent of sales so far were of screens larger than 72 inches - bigger, better resolution products are doing well,” said Choi Koo-yeon, head of the local consumer electronics sales team. “We sold 1.5 times more than our initial goal so far.”

Until recent, 4K was the highest resolution for televisions in the market. Samsung’s 8K offers four times the resolution compared to 4K.

When compared to 4K televisions, 8K televisions boast screens that are brighter with more color contrast and sharper edges. However, the success of 8K television may depend on whether 8K content is developed. Most of the latest content is in 4K.