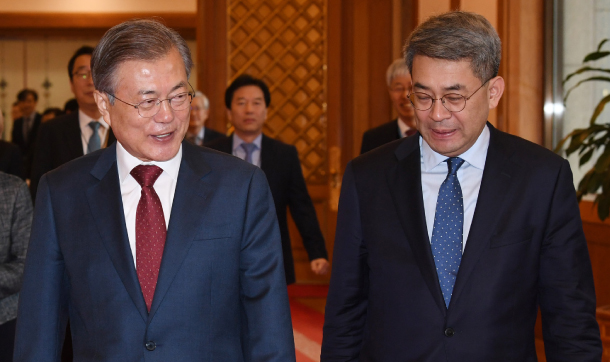 Kwon Goo-hoon, the new head of the presidential committee tasked with expanding economic cooperation with northern states - North Korea in particular - said he will take advantage of his experience at Goldman Sachs and the International Monetary Fund to lead the committee.

“I think we are at a stage where we need to make the most out of global networks for northern economic cooperation in order to produce specific and tangible outcomes,” Kwon said Wednesday at his first press briefing at the Blue House.

“I will strive to apply my experiences from the IMF and Goldman Sachs to further enhance northern economic policy,” he continued.

“I will especially contemplate what I can do to best advise the president to realize the expansion of economic opportunity and creation of a new economic map in a new territory based on a peace regime on the Korean Peninsula,” added the new chairman.

Kwon’s press conference followed an official appointment ceremony presided over by President Moon Jae-in early Wednesday, bestowing on him the title of chairman of the Presidential Committee on Northern Economic Cooperation, which seeks to foster economic cooperation with northern states, including North Korea.

Kwon, chief Korea economist and strategist at Goldman Sachs, retains his position there while serving as the committee chief, which is a non-paying position.

The Blue House said it was Moon who recommended the 56-year-old economist, with whom he had no personal relationship, to the Blue House’s personnel affairs office for the position after he was impressed with Kwon’s public lecture, aired on television, on a potential economic boon that could come from engaging North Korea and its economy.

Launched in December 2017, the committee aims at expanding economic cooperation with the Russian Far East, Northeast Asia and Eurasia through opening economic ties with North Korea, a prospect Moon says could contribute to peace and stability on the Korean Peninsula.

Kwon’s predecessor, Rep. Song Young-gil of the ruling Democratic Party, left the post in July when he was running for the party’s top position. The committee’s chief post has been vacant for nearly three months.