Businessman who abused chickens and employees is arrested

Businessman who abused chickens and employees is arrested 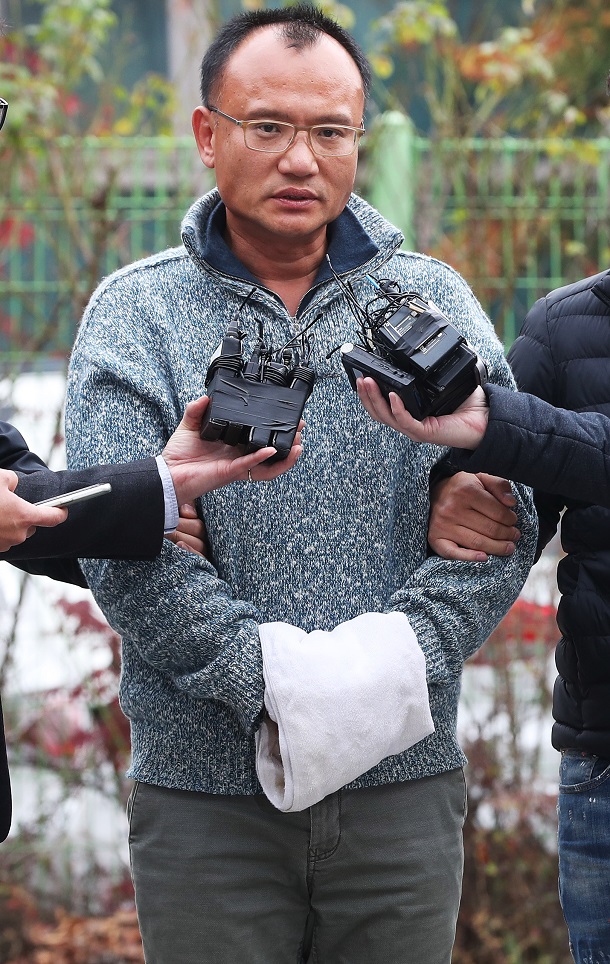 Yang Jin-ho, with hands cuffed, speaks to reporters after his arrest by police on Wednesday.

The Gyeonggi Nambu Police Precinct announced Wednesday that it had arrested Yang Jin-ho, chairman of Korea Future Technology, in the garage of one of his apartments in Seongnam, Gyeonggi, at noon. He faces charges of assault, coercion and violation of various laws regarding animal protection, private information and sexual abuse.

Yang said he was “genuinely sorry” and admitted wrongdoings when police brought him in front of the press after his arrest. He remained silent when reporters asked him about the specific charges he faces.

Police pinned another charge on Yang – illegal drug abuse – that wasn’t referred to in fulsome press coverage of his other antics. Multiple acquaintances witnessed him smoking marijuana and using methamphetamine in the past, police said.

Yang’s arrest came eight days after investigative journalists released footage of him abusing a former employee and making other employees kill a chicken with a bow and arrow, then decapitating it with a sword. Newstapa, a media outlet run by the Korea Center for Investigative Journalism, released the footage and reported that Yang had made around 40 billion won ($35.6 million) from the popular online file sharing systems Wedisk and Filenori, which he effectively owns.

Last Friday, police raided ten different places tied to Yang, including his home, the Wedisk office in Seongnam as well as the office of Korea Future Technology in Gunpo. The bow and arrow and sword seen in the footage of the chicken slaying was found at a different residence, though Yang himself was nowhere to be seen during that raid.

“We gained an arrest warrant from the court on Tuesday on charges of abuse and coercion as shown in the footage,” a police spokesman said after his arrest. “Given his recent conduct, we concluded he would not comply with a regular summons and so decided to arrest him.”

Local newspaper Pressian as well as Newstapa talked to a former head of Filenori fired by Yang years ago, who alleged that Yang forced employees to regularly communicate with “heavy uploaders” – those who upload a great amount of pornography to the sites – with burner phones, in order to expedite circulation of material popular with users.