Savina brings art to Eunpyeong: After moving from central Seoul, the private contemporary art museum hopes to start a trend

Savina brings art to Eunpyeong: After moving from central Seoul, the private contemporary art museum hopes to start a trend 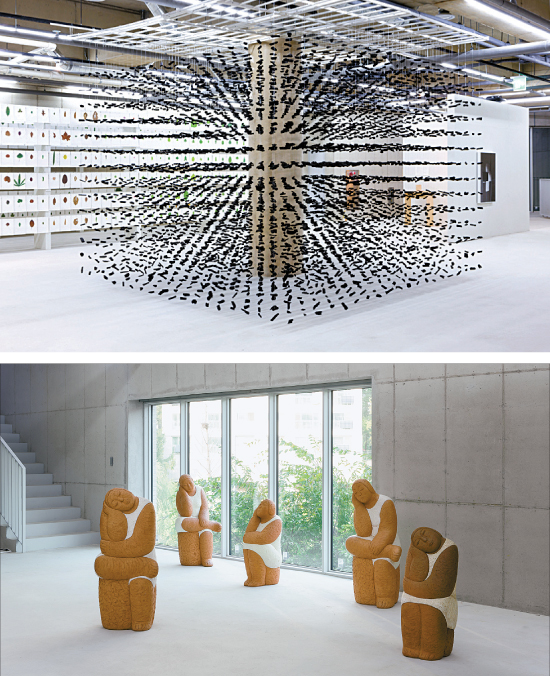 Artist Park Sun-gi’s installation “An aggregation 201808,” top, and Han Ai-kyu’s terracota sculptures “From The Pensive Bodhisattva,” above, are part of the “Enlightened Mind - The Artists’ Way to Meditation” exhibition at the newly-relocated Savina Museum of Contemporary Art.[SAVINA MUSEUM OF CONTEMPORARY ART]

When it comes to culture, northern Seoul’s Eunpyeong district is relatively barren compared to the central and southern parts of the city. But that’s expected to change soon.

Savina Museum of Contemporary Art, one of Korea’s top private museums, recently relocated to the district and opened new exhibitions at the beginning of this month. In addition, the Culture Ministry announced on Thursday that it would construct Korea’s first-ever national museum for Korean literature in the district.

The new Savina Museum building, designed by architect studio Space Group, has five stories of triangular floors on a triangular site. It has two galleries that take up the second and third floors, rooms for research and archiving on the fourth floor, a cafe on the first floor, a space for multidisciplinary programs and the “Room for Meditation,” which has a great view of Mount Bukhan, on the fifth floor.

The museum started three exhibitions to celebrate the relocation. The main exhibition, being held in the two galleries, is a group show entitled “Enlightened Mind - The Artists’ Way to Meditation.” It features works by 28 Korean and foreign artists, ranging from Park Sun-gi’s installation work to Michael Kenna’s photography, which have therapeutic qualities.

And “Private Moon,” being held on the fifth floor, is a solo show of Russian artist Leonid Tishkov, who is famous on social media for his romantic photographs of the illuminating crescent that he created and temporarily put in various places all around the world. The exhibition includes 13 pieces from his photo series and the artificial crescent installed on the museum roof. The third one is a permanent exhibition of site-specific installations by 13 teams of artists and architects in various parts of the new museum building.

Asked why the museum relocated from its former space near Anguk station in central Seoul - a key point between Seoul’s two major art zones in Samcheong-dong and Insa-dong - the museum director Lee Myung-ok said in a phone interview with the Korea JoongAng Daily that the old space was too small to meet the changing needs of museum visitors and that it was difficult to find a larger space in central Seoul.

“Now museum visitors, in particular those in their 20s and 30s who represent the largest part of our audience, are no longer satisfied with only seeing exhibitions but also want to rest, play and experience diverse cultural programs in the museum,” she explained. “I looked for a new space and chose this place, not only because the land price was relatively cheap but also because it is close to Mount Bukhan’s Dulle-gil trail, meeting the growing demand of museum visitors today, who want to enjoy nature and art together.” 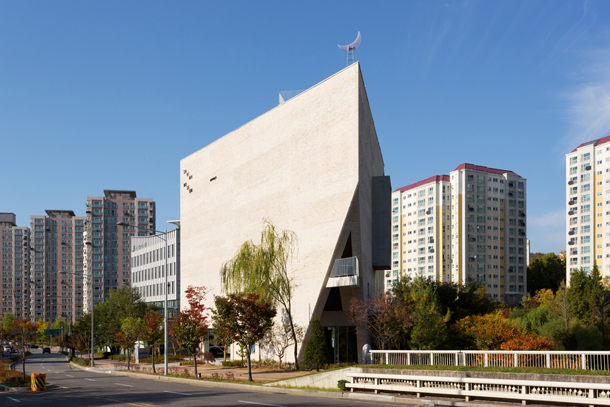 Meanwhile, the Culture Ministry said Thursday it has designated the former ‘Journalist’s Village’ in Eunpyeong district as the site for the National Museum of Korean Literature. The government said it will spend 60 billion won ($53.6 million) to complete the museum by 2022. There had been nearly three years of heated debate over where to construct the institution.

The site is a 20-minute walk from Savina Museum. And near the art museum is the National Institute for Translation of Korean Classics. Just north of that is the famous Jingwan temple and the Eunpyeong Hanok village.

“These could make a new cultural zone together,” Savina Director Lee said.