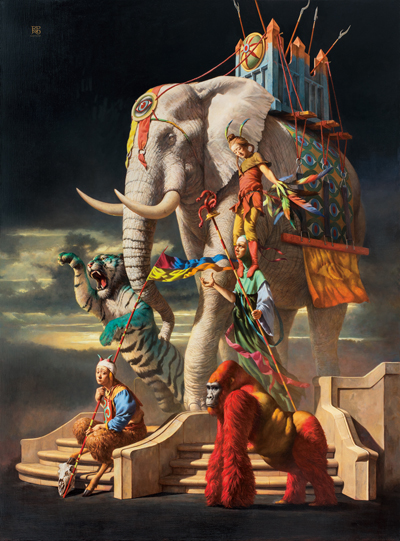 Park Min-joon’s latest solo exhibition, “Rapport Circus,” might have started as early as 2003 with his first depiction of a tightrope walker.

At that time, the painting mainly served as an expression of his determination to pursue his ideas on his own terms.

In 2012, when things still weren’t working out, he again painted a tightrope walker. This time he added more narratives to the subject, laying the foundation for a full-blown story based around the circus troupe the fictional tightrope walker belonged to.

The subject and style of Park’s paintings, which echo Renaissance era styles, are quite unique in the Korean art world. Concerned with religion, mythology, alchemy, surrealism and Magical Realism, Park created a liminal world that straddles the line between reality and fantasy by borrowing “mythological images and historical anecdotes.”

But the expression of his imaginative world didn’t end there: he also wrote a novel, “Story of Rapport,” to tell the rich stories behind his artwork. For the first time, he even made sculptures of the main characters in resin in order to make them feel more real and vivid.

“While writing the novel, I hit on more interesting ideas about forms of expression, including the sculptures,” the 46-year-old painter said during an interview with Yonhap News Agency at Gallery Hyundai on Wednesday.

Not only does the exhibition showcase his latest paintings, it also brings the paintings created by the main character, Rapu the acrobat, into real life.

“It is always hard and awkward for me to explain my paintings. It is like exposing myself. I thought if I wrote a book that explained the story behind my paintings, I wouldn’t have to do it verbally,” he said. “But in fact, I actually have to talk more to talk about the book!” he laughed.

In the mid 2000s, he was struck and deeply moved by Italian painter Michelangelo Merisi da Caravaggio’s “The Incredulity of Saint Thomas.” The master artist, known for his realistic expression of the human state and his influence on Baroque painting, left a life-changing impression on him.

“I realized painting was not about skills. It should move people’s minds,” he said.

In 2007, the graduate of Seoul’s Hongik University went to Japan to study oil painting materials and techniques at Tokyo National University of Fine Arts.

After finishing his studies, he moved to New York where he lived and worked until three years ago. Back in Korea, he is now living on the southern resort island of Jeju.

In hard times, his arduous and ceaseless work felt like it was “eating away” at him, as the nature of his painting style was too time-consuming and labor-intensive according to the artist.

On shutting himself in his workroom and painting all day long he said, “(It felt like it) would eventually erase me and only my paintings would remain.”

But now that he has overcome those moments, he believes it might be OK that way.

“I think it is all right that only my paintings are remembered.”

The exhibition runs through Nov. 25.