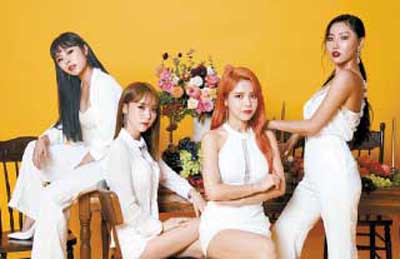 Girl group Mamamoo is returning with a new EP on Nov. 29, according to their agency RBW Entertainment on Thursday.

“The group is releasing their eighth EP on Nov. 29,” the agency said through a press statement. “The upcoming album is the third of their ‘Four season, four color’ project.”

Since the beginning of this year, the group has been releasing seasonal albums that combine a seasonal color with each member’s character. In the spring, the group showcased the EP “Yellow Flower” - yellow is member Hwasa’s symbolic color - followed by the EP “Red Moon” in summer - the red representing member Moonbyul. The upcoming fall album will be blue, the color of member Solar.