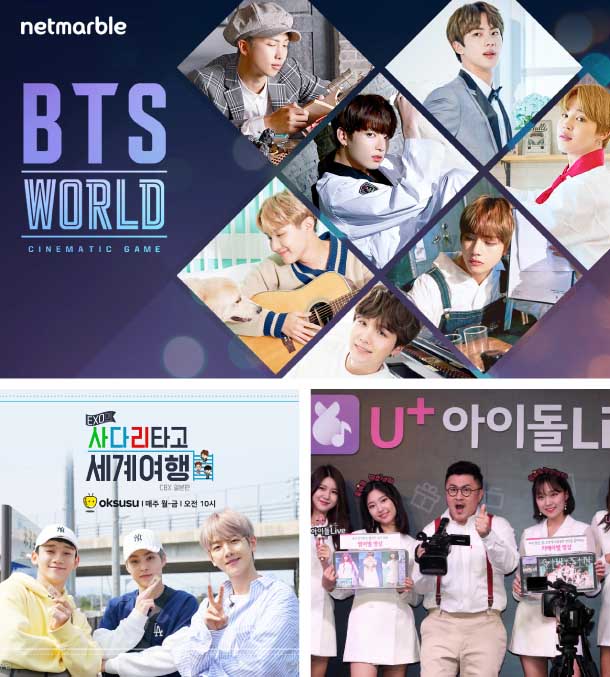 Over the past decade, Korea’s major tech giants have relied on K-pop idols to promote and model for their products. Stores would post huge photos of the pop stars in front of their stores or hand out free promotional photos to the customers when they made purchases. Now, as K-pop gains global attention, these tech giants have taken these partnerships to the next level: they are working with major entertainment agencies to mix K-pop and technology to produce creative, original content.

Three years ago, when Korea’s top mobile carrier SK Telecom (SKT) introduced Seol Hyun from girl group AOA as its main spokesmodel, it turned out to be a success. Thanks to her appearance in SKT’s advertisement for the Luna budget smartphone, 120,000 of the so-called “Seol Hyun phones” sold in just three months. SKT continued to feature Seol Hyun as the face of the Sol smartphone, the follow-up to the Luna, and for events promoting their VR products.

The other major local telecommunications companies LG U+ and KT have also used K-pop idols as their spokesmodels to market their products.

This year, however, rather than dedicating themselves to certain idol groups or singers, major telecom companies are now hoping to attract customers by partnering with big entertainment agencies. Together, they aim to appeal to young K-pop fans with their top-notch technology - from artificial intelligence to VR to blockchain technology.

Together with SM Entertainment - home to popular K-pop groups including Girls’ Generation, TVXQ and Exo - SKT launched its mobile video streaming service Oksusu with a series of reality programs starring SM stars such as Exo-CBX, Red Velvet and S.E.S.

According to SK Broadband in June, the series “Exo Travels the World through a Ladder of Fortune” hit 20 million views just 39 days after its release. Following the success, Oksusu partnered with broadcasting company JTBC for the upcoming idol quiz show “Sungduck Who” (working title), set to premiere Nov. 13.

Steven Spielberg’s recent sci-fi film “Ready Player One” may also become a reality soon. SKT’s latest product, Oksusu Social VR, released on Oct. 12, uses VR technology to take users to a virtual space where they can move and make friends with other virtual friends. Together, they can watch their favorite K-pop concerts up close.

They can also choose a specific member and watch that member dance throughout the whole performance.

The company is also preparing to apply virtual reality and augmented reality technology to the app by the end of the year as well. The firm’s goal is to turn the app into a portal for idol group concert videos.

Genie Music, a subsidiary of telephone company KT, is also gearing up to prepare a VR service where users can watch hologram K-pop concerts with VR headsets.

Mobile game developer Netmarble Games announced in April that it had acquired a 25.7 percent stake in agency in Big Hit Entertainment, home to boy band sensation BTS, for 201.43 billion won ($189.3 million), becoming the second-largest shareholder in the agency. The two are currently preparing a cinematic mobile game titled BTS World in which users can train and manage the members of BTS. The game will feature 10,000 pictures and over 100 video clips of the group.

“BTS World will target the global market,” said Park Jun-hyuk, the president of Netmarble Games at a press event held in February. “We want [the game] to succeed not only in Korea, but also abroad.”

Meanwhile, Kakao Games, a subsidiary of Kakao, launched the Ensemble Stars game in January, in which users can manage and develop their idol characters by accomplishing missions and competing with other idols.

“[The collaboration between major entertainment agencies and technology giants] is a very natural phenomenon,” says culture critic Ha Jae-geun. “Tech giants such as telecommunications or IT companies need creative and interesting content while K-pop agencies need cutting-edge technology to promote their artists and distribute their contents. More collaborations between the two are expected in the near future.”

However, many of these tech products are not as user-friendly as fans would like them to be.

VR headsets are heavy and costly, making it not always easy to delve into the VR world. Although telecommunications companies are working to produce lighter headsets with better sound quality, not everyone will be able to afford them.

“When I first used the app, it took a long time to load the videos, and there are also a limited number of performances,” said university student Lee Ji-eun, a user of the app. “It’s new and creative in some ways, but I still prefer to watch my favorite groups perform on other platforms like YouTube.”