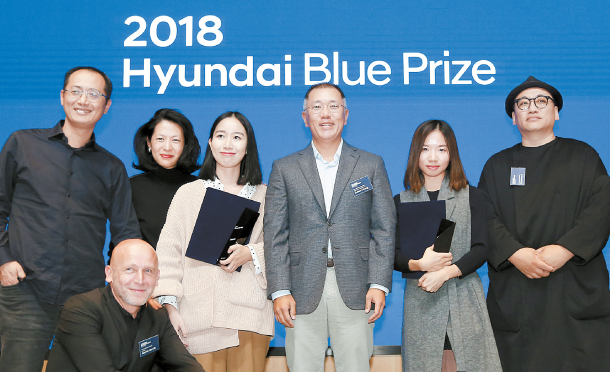 Hyundai Motor Group Vice Chairman Chung Eui-sun, third from right, poses for a photo with judges and winners of the Hyundai Blue Prize during the opening ceremony of “Future Humanity - Our Shared Planet” Wednesday in Beijing. [HYUNDAI MOTOR]

Hyundai Motor started a global media art project that gives a glimpse of a mobile future, the company said Thursday.

The exhibition held at Hyundai Motor Studios in Korea, China and Russia, deals with relations between humans and machines in the future and between culture and technology. It is called “Future Humanity - Our Shared Planet.”

An opening ceremony was held in Beijing Wednesday attended by Hyundai Motor Executive Vice Chairman Chung Eui-sun. In Seoul, the project starts today and in Moscow from Nov. 24. A total of 19 artists will introduce 25 artworks. The project runs through the end of February. Each studio will show different pieces of art.

Cornelia Schneider, vice president and the head of space innovation for Hyundai Motor, said the company intended to show the importance and the meaning of humanity in a world in which technology has reshaped humans’ lifestyles.

The project was jointly developed by Hyundai Motor Group, the Central Academy of Fine Arts Beijing and Ars Electronica, a cultural and scientific institute active in the field of media arts.

Other media arts pieces use such technologies as virtual reality, robotics, the Internet of Things and big data to express artistic visions of the future to come.

At Seoul’s exhibition, pieces by media artists Yangachi, Roomtone and Lee Jang-won will be exhibited. At today’s opening ceremony, Martin Honzik, director of the Ars Electronica Festival, will take part along with media artists to give an overview of the show.