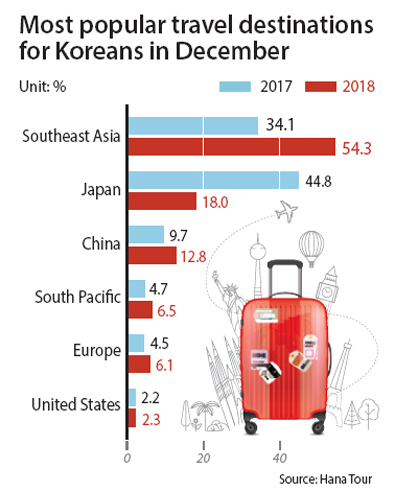 Southeast Asia has emerged as the most popular destination for Korean tourists planning trips in December, according to travel agency Hana Tour Thursday.

The company said that, as of Nov. 7, Vietnam and other Southeast Asian countries accounted for 54.3 percent of all reservations for overseas travel during the following month.

Southeast Asia is more popular as a destination now than in December 2017, when 34.1 percent of all reservations were for trips to the region.

After Southeast Asia, Japan is the second most popular destination this December, with 18 percent of reservations being made for travel to the country. Last December, it was in the top spot with 44.8 percent of the bookings.

Meanwhile, China maintained its place as the third most popular destination, jumping over 3 percentage points from 9.7 percent last year to 12.8 percent this December.

Among Southeast Asian countries, Vietnam is the most popular destination, with 33.7 percent of reservations, due in part to the popularity of tourist resorts.

Thailand and the Philippines rank next in Southeast Asia.

Hana Tour said Koreans are drawn to the Southeast during the end-of-the-year season as they seek warmer climates to escape Korea’s cold winter.

The agency also explained that the demand for travel to Japan has recently slowed following typhoons and a strong earthquake that hit the northern island of Hokkaido.

Around 4,000 Koreans were left stranded in Hokkaido in September when a 6.6-magnitude earthquake hit Japan and closed the regional airport.

Hana Tour, however, said it expects an increase in reservations for year-end travel to Japan as the neighboring country is recovering from the impact of the natural disasters.