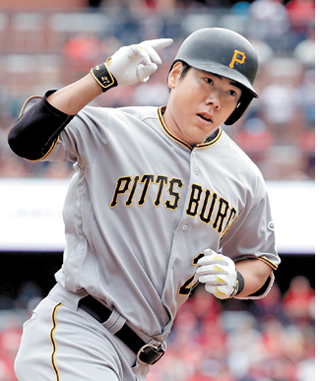 Kang Jung-ho of the Pittsburgh Pirates rounds the bases after hitting a home run during a game against the St. Louis Cardinals in St. Louis in Oct. 1, 2016. [AP/YONHAP]

The club announced on Thursday that they inked Kang to a one-year deal, reportedly worth $3 million, plus $2.5 million in performance bonuses.

On Oct. 31, the Pirates declined to pick up Kang’s $5.5 million option after his four-year, $11 million contract expired. Kang was free to explore the open market, though the Pirates were widely expected to sign him for another go.

“We appreciate Jung-ho’s hard work to get back to being a productive major league player while continuing to handle himself appropriately off the field,” Pirates’ general manager Neal Huntington told MLB.com. “We feel that bringing Jung-ho back in 2019 will make us better as he will have the ability to make a positive impact on our lineup. Competition and options are important to any organization and this signing provides us with both.”

The new contract means a new baseball lifeline for a player who almost took himself out of the big leagues with off-field trouble.

The former All-Star shortstop in the Korea Baseball Organization (KBO) put up solid numbers as a third baseman for the Pirates in 2015 and 2016. But legal issues and injuries kept him off the field for the entire 2017 season and most of this year.

In December 2016, Kang was charged with fleeing the scene of an accident after driving under the influence of alcohol in Seoul and received a suspended jail term three months later. The DUI arrest came only months after Kang was investigated by Chicago police over a sexual assault allegation.

He was later denied a U.S. work visa, which prevented him from joining the Pirates.

Kang went to play in the Dominican Winter League to try to stay sharp but was released early.

Kang got his work permit in April this year and began playing in the minor leagues in June. Then he suffered a left wrist injury later that month and underwent surgery on Aug. 3, which threatened to end his comeback bid.

But Kang was called up for the Pirates’ final regular season series against the Cincinnati Reds and batted 2-for-6 in three games.

In Kang’s absence this past regular season, rookie Colin Moran served as the primary third baseman. Moran batted .277/.340/.407 with 11 homers and 58 RBIs in 144 games - solid numbers but without the kind of power that Kang displayed in his first two seasons.