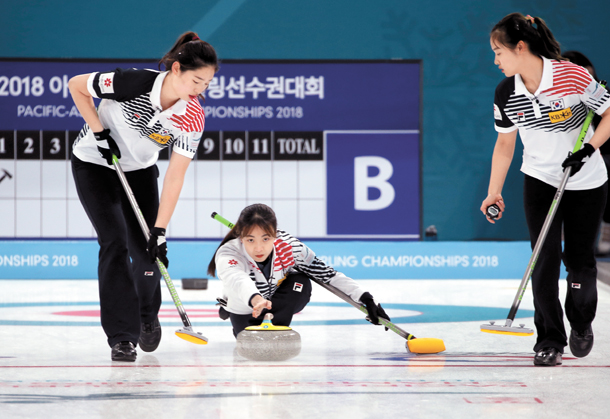 The Korean women’s curling team competes in a round robin game against Japan at the 2018 Pacific-Asia Curling Championship at Gangneung Curling Centre in Gangwon. [YONHAP]

The old Team Kim is gone. Say hello to the new one.

Team Kim, the Korean women’s curling team that won silver at the 2018 PyeongChang Olympics and stole the hearts of a nation, no longer represents the country.

They’ve been replaced by a new, younger Team Kim that hopes their names will be remembered in the future.

The team finished the round robin in third with four wins and two losses. During the semifinals against China on Thursday, Korea won 7-4 to advance to the finals. As Korea lost to China during the round robin match, it was a good redemption victory.

In the finals, scheduled for tomorrow at 2 p.m., Korea will play against Japan, who defeated Hong Kong on Friday.

If Korea wins, this will be the country’s sixth gold medal at the event.

Although the women’s curling team is continuing their success at the PyeongChang Olympics, it isn’t the same team. The team currently competing at the PACC defeated the old Team Kim 10-3 during the 2018-19 national team qualifiers in August.

Since the name of a curling team is determined by the surname of the skip, the new Korean team is also called Team Kim. Of the teams competing at the PACC, Team Kim is the youngest. The entire squad is composed of 19-year-olds who all just graduated from high school.

“When I was in seventh grade at Minrak Middle School at Uijeongbu [in Gyeonggi], I was interested in track,” Kim Min-ji said. “But at the time, [Kim] Hye-rin, who was my classmate, was playing curling. It looked fun so I started playing with her and ended up playing the sport. Then, [Kim] Su-jin, joined us in the eighth grade when she joined our school after moving from Incheon. All three of us went to Songhyun High School, and in 10th grade, [Yang] Tae-i completed our team.”

While competing for Songhyun High School, the team was quick to receive spotlight in the world of curling, finishing third at the 2016 World Junior Curling Championship and finishing fourth at the same event last year.

After their successful junior career right after high school, they continued the sport as professionals, joining the Chuncheon, Gangwon, team.

“We’ve been playing together since middle school, so we have great teamwork,” said Kim Soo-jin. “If four of us continue to play together, I believe that we can play well at the 2022 Beijing Olympics.”

Over the past three seasons, the Chuncheon Team Kim always competed against the North Gyeongsang Team Kim in the national team qualifiers, but they always came up just short. This year, the North Gyeongsang team once again seemed as if they were going to represent the national team for another year, as it swept all of its games in round robin. However, it missed their spot by losing the final game to the Chuncheon team.

“At the PyeongChang Olympics, we had to watch the team win a silver medal from the spectator seats,” said Kim Min-ji. “Team Kim has great teamwork and talent, so we always try to learn from them. Since we always finished second in the national team qualifiers, this year, we told ourselves that we got nothing to lose. I think having a competitor motivates us, and for Korean curling to improve, such competition is needed.”

After finally earning the national team spot, the Chuncheon team made their debut at the first leg of the Curling World Cup in Suzhou, China. The team had a disappointing debut, finishing last in Group B with one win and five losses against the world’s top teams.

“By competing against the world’s top teams, we learned that we have to make a lot of improvements,” said Yang.

The team’s coach, Lee Sung-jun, agreed that the team needs to improve, but they are still young. Lee’s been coaching the team for seven years.

“Since they’re still young, they are inconsistent,” Lee said. “The North Gyeongsang team won Olympic silver after playing together for a long period of time. I believe that our team can also become a team that can compete against the world’s top teams within the next two to three years.”

As curling in Korea became more familiar to the fans after the PyeongChang Olympics, the young Team Kim is hoping to continue to build on its success. To do so, the team believes that they need to see better results in international tournaments.

“To continue the popularity of curling, we need to play well,” Kim Min-ji said. “It is a little overwhelming to be on the national team right after making a debut on the senior tournament, but we’ll try to continue [the former] Team Kim’s success by winning this tournament for the third straight year.”

Korea will compete for gold against Japan at 2 p.m. today at Gangneung Curling Centre in Gangwon.