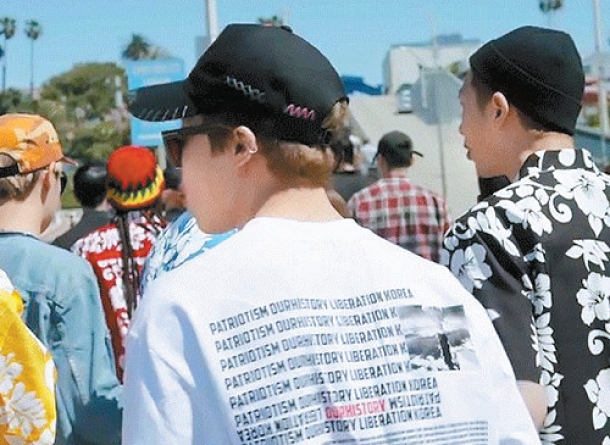 Global sensation BTS’s scheduled performance on Japanese television network TV Asahi’s music program “Music Station” has been canceled due to controversy regarding a member having worn a T-shirt depicting the U.S. atomic bombing of Hiroshima.

On Thursday, “Music Station” announced through its official website that BTS’s appearance on the program, which was originally scheduled for Friday, had been canceled following furor over “a T-shirt design worn by a member.”

“We have asked what the intention of wearing the T-shirt was to the record company, but after a thorough evaluation over the issue, we have decided to call off the band’s performance,” TV Asahi wrote in the notice. The group was supposed to perform their songs “Fake Love” and “Idol” at the show.

The T-shirt that Jimin wore during the group’s tour to the United States featured the words “Patriotism,” “Our history,” “Liberation” and “Korea” along with two photos - one depicting the celebration of Korean independence, and the other one depicting the atomic bombing of Hiroshima.

RM’s Twitter post during Korea’s Liberation anniversary read: “There is no future for a nation that forgets history. I thank Korean independence fighters. Hurray for the independence of Korea!”

The group is scheduled to perform an upcoming series of concerts scheduled for Nov. 13 and 14 at the Tokyo Dome, as part of their “Love Yourself” world tour, which kicked off in August in Seoul.

Meanwhile, BTS’s album “Love Yourself: Answer” has sold more than 2.03 million copies, breaking a record for the highest number of albums sold in the history of the Gaon Music Chart.