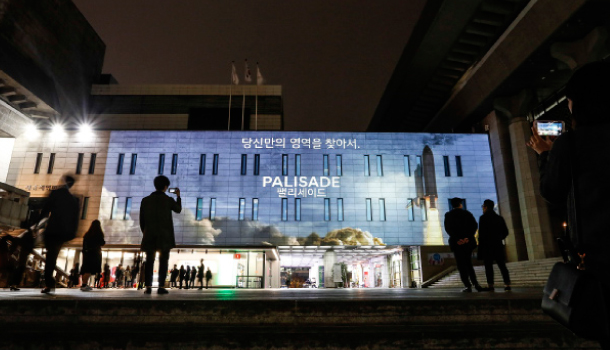 Hyundai Motor’s new large SUV, set to be unveiled at the Los Angeles Auto Show later this month, will be called the Palisade.

According to the carmaker Friday, its new model for the 2020 model year will be revealed on Nov. 28 during a press event at the L.A. motor show.

The company will start taking preorders for the SUV in the Korean market starting at the end of this month, earlier than other countries. Hyundai Motor America said Thursday the car will be available in the U.S. market in the summer of 2019. Hyundai said the SUV was named after Pacific Palisades in southern California, an affluent neighborhood that boasts a series of coastal cliffs. The carmaker is hoping that the Palisade will live up to its premium-sounding name.

The three-row SUV will offer seven or eight passenger seats, according to a spokesperson from Hyundai Motor. The major focus in designing the car is enabling everybody inside the car, even those in the third row, can enjoy their own space. In some vehicles with third rows, space is tight.

The carmaker said its new Palisade will offer the most seating space among competing vehicles in the same segment. It also promised diverse seat adjustment options and an easy-to-use interface for adjusting car settings for passenger convenience.

“For large SUVs, carmakers need to offer more value than just the basic driving performance,” a Hyundai spokesman said. “The spacious interior and intuitive interface for safety and convenience services offered in the car are its competitive edge.”

The carmaker is expecting a lot from this vehicle, as it in hopes to make the Palisade its flagship SUV model when families are increasingly lean towards bigger SUVs over sedans. The Palisade will replace the Max Cruze (Santa Fe XL overseas) as Hyundai’s largest SUV.

Specifications and pricing for the Palisade were not released on Friday.