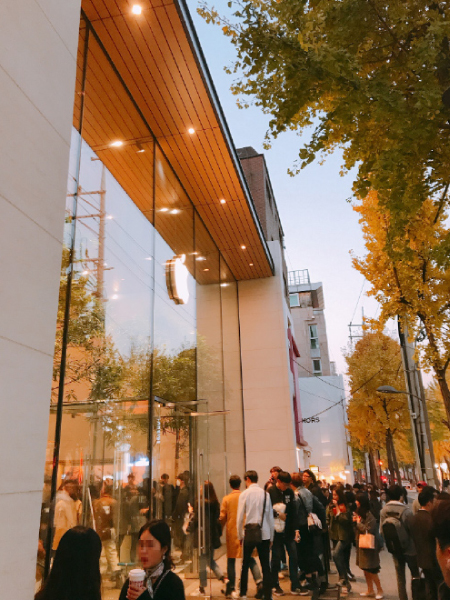 A week after Apple introduced its latest iPhone series at stores in Korea, sales are only about 60 percent of those reported for the previous lineup over the same period of time.

According to estimates compiled by local mobile carriers, a total of 170,000 iPhone XS, XS Max and XR models were purchased between Nov. 2 and Nov. 7. A total of 280,000 iPhones 8 and X models were sold in the first week of their release in November 2017. Sales of the two models began three weeks apart.

Industry watchers assumed that Apple’s simultaneous release of the three models was designed to garner greater attention and boost sales in the early days.

However, figures so far show that the latest iPhones are selling more slowly than earlier models.

“It’s not doing that great,” said an employee at a brick-and-mortar phone shop in central Seoul on Friday when asked if the new iPhones are popular.

“There’s the expensive price tag, but it also has to do with the fact that there aren’t dramatic function upgrades. To be honest, even I can’t really notice a big difference between the iPhone X and XS. Maybe the next series will come with more innovative features - we’ll see.”

Even the budget XR model is priced slightly below one million won.

Despite the price concerns, presales have been reasonably strong. SK Telecom, KT and LG U+ took orders between Oct. 26 and Nov. 1.

Presales results for the three new models differed per company, but the general assessment was that demand was similar or stronger than for previous generation iPhones.

Presale results don’t necessarily indicate success. Customers who preorder iPhones in Korea, even before actually touching the product, are likely to be loyal Apple fans.

“The thing about Apple maniacs is that they will get their hands on the next iPhone no matter what,” said a source from one of the mobile carriers.

“But success doesn’t just come from them. The general public, especially those switching between smartphone brands, should be attracted to buying it, too. The new iPhone seems to be failing in that respect this time.”

Up until a few years ago, a few manufacturers like Apple and Samsung dominated the smartphone market. Customers nowadays have a much wider ranges of options in terms of price and style.

Over the last decade, smartphone technology has advanced so much that even budget models priced at half that of the latest iPhones come with high-tech functions, such as face unlock.

From Apple’s side, there are signs that the company is well aware of the slower demand.