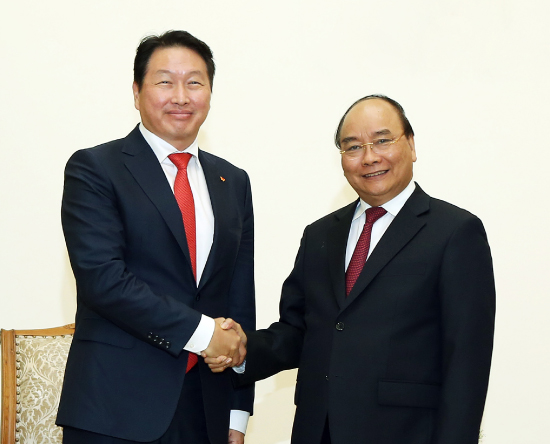 They met for the second time in a year. As a result of the previous meeting, SK purchased a 9.5 percent stake in the holding company of Masan Group, one of Vietnam’s largest private enterprises, for $470 million in September.

“We are pursuing further cooperation with private companies after our first meeting beginning with investment in Masan Group,” said the chairman of Korea’s third-largest conglomerate. “We expect cooperation in other areas such as privatization of state-owned companies to speed up.”

“Chairman Chey is the only foreign company chief that I meet every year, my interest in SK is special,” said Nguyen.

Mangrove forests used to cover 4,400 square kilometers (1.08 million acres) of Vietnam, but only 30 percent remains. Since last May, SK Innovation has provided support to reforestation efforts in a mangrove forest in Tra Vinh province and reforestation research by Ho Chi Minh City University of Technology.

Chey also participated in the Hanoi Forum Friday and Saturday.

The Korea Foundation for Advanced Studies, an academic non-profit organization, and Vietnam National University in Hanoi jointly launched the forum this year to encourage academic cooperation between the two allies.

Korea Inc. has been paying increasing attention to Vietnam as an alternative investment destination to China. Vietnam is expediting privatization amid a difficult fiscal situation, putting on sale several government-owned companies.

In late October, Samsung Electronics Vice Chairman Lee Jae-yong paid a visit to Vietnam and vowed to increase investment during a meeting with the Vietnamese prime minister. Samsung Electronics operates major phone manufacturing lines in Vietnam, which has helped Vietnam become the second-largest exporter of mobile phones after China. As a manufacturing location, Vietnam serves as an important strategic partner for many Korean companies’ global supply chain.

During President Moon Jae-in’s visit to the country earlier this year, senior executives from SK and Samsung were in the president’s entourage in an effort to establish stronger business relations.