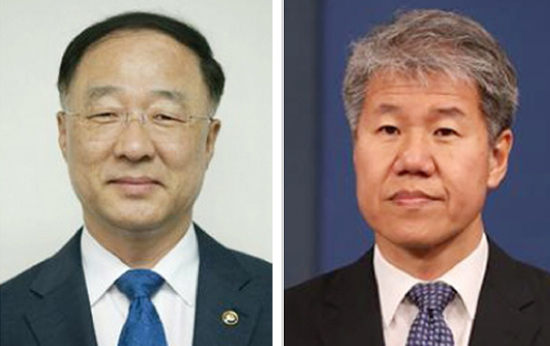 Kim Dong-yeon, finance minister and deputy prime minister for economic affairs, openly locked horns with Jang Ha-sung, presidential chief of staff for policy, on how to save Korea’s slumping economy. Jang crafted Moon’s trademark income-led growth policy and insisted on keeping it even as thousands of jobs vanished, while Kim wanted changes.

The income-led growth policy aims to boost the domestic economy by raising low-income wages and creating jobs in the public sector.

By replacing Kim and Jang, the Blue House said that the administration’s double-tier leadership system for national economic policy planning would become a single-tier system, with authority given to the finance minister.

But the income-led growth policy will remain, the presidential office said.

Hong was born in Chuncheon, Gangwon, and earned his bachelor’s degree in economics at Hanyang University, after which he earned a master’s in business administration at the same school and a master’s in economics at the University in Salford in Manchester, Britain. Hong served as first vice minister of the Ministry of Science, ICT and Future during the Park Geun-hye government.

Yoon Young-chan, presidential secretary for public affairs, said at a press conference Friday that Hong was the perfect fit for finance minister at a time when the country needs “innovative and drastic policy implementation,” adding the Blue House looked forward to seeing him pursue economic policies focused on “income-led growth and fair economy,” creating an “embracing country.”

Noh Hyeong-ouk, deputy chief of the Office for Government Policy Coordination under the Prime Minister’s Office, will succeed Hong.

Kim Soo-hyun, senior presidential secretary for social affairs, was named Jang’s successor as presidential chief of staff for policy. Born in Yeongdeok County, North Gyeongsang, Kim earned his bachelor’s and master’s degree in urban planning and engineering at Seoul National University, after which he earned a Ph.D. in environmental studies from the same school. Kim Soo-hyun served as presidential secretary for social affairs and adviser on economic policy during the Roh Moo-hyun administration, during which he also worked as vice environment minister.

Yoon, the presidential secretary for public affairs, said Friday that Kim Soo-hyun was the right person to reduce the wage gap and solve issues pertaining to Korea’s low birth rate and an aging society.

Rep. Yoon Young-seok, chief spokesman for the main opposition Liberty Korea Party, said tapping Kim Soo-hyun as the new presidential chief of staff for policy was a “declaration of war” by the Moon Blue House to continue to pursue its failed income-led growth policy because Kim Soo-hyun helped draft it. Yoon also took issue with Kim Soo-hyun's academic background, saying he studied urban planning and engineering in school and wasn’t an economics expert.

The minor-right Bareunmirae Party chimed in, saying the Moon Blue House wasn’t admitting to the failure of its economic policy, and that making Hong Nam-ki - which it called Moon’s “yes man” - the new finance minister would only wreak greater damage to the economy.

Finance minister nominee Hong will go through a parliamentary hearing, though an approval from the National Assembly is not required.