No sprinklers in gosiwon where fire killed 7 day laborers

No sprinklers in gosiwon where fire killed 7 day laborers 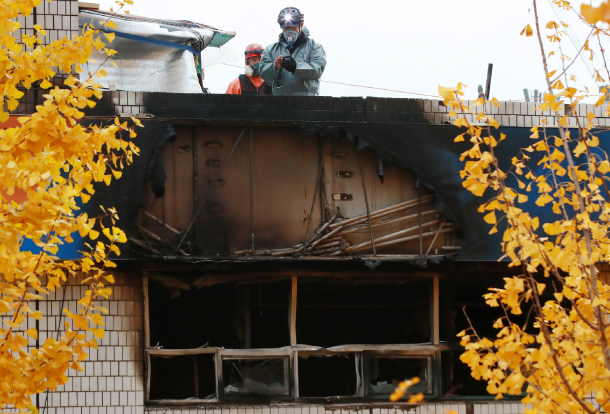 Firefighters examine a gosiwon (one-room, low-cost apartment) located in Jongno District, central Seoul, on Friday. The blaze started on the third floor of the three-story building and took two hours to be completely extinguished. Seven people have died in the fire so far. [YONHAP]

A fire swept through a cheap lodging house for day laborers in Jongno District, central Seoul, on Friday, killing at least seven people and injuring 11 others, according to fire department authorities.

About 50 people were living in the one-room, low-cost apartments known as gosiwon in Korean.

Officials say that most were day laborers and those killed or injured were in their fifties and seventies.

The fire broke out at 5 a.m. Some 173 firefighters and 40 police officers were dispatched to put out the fire, which they did two hours later.

“I woke up to smoke a cigarette at around 4:45 a.m.,” said a resident surnamed Shim in an interview with JoongAng Ilbo. “On my way to the rooftop, I saw smoke coming from Room 301. The person in Room 301 was trying to put out a fire. I yelled that there was fire and went downstairs to hit the emergency alarm. But the alarm didn’t work.”

The resident of Room 301 later told police that the blaze started when his electric heater caught on fire. “I tried to put it out with blankets and my clothes but it was no use,” he told police.

The fire department later confirmed that the aged building had no sprinklers, but was equipped with other emergency equipment such as a fire alarm, exit signs and ropes.

“Since the fire started early in the morning and near the evacuation route, it progressed further than it should have,” said an official from the Jongno Fire Station.

All 18 casualties were people living on the third floor or rooms on the roof.

Everyone on the second floor was able to escape. The first floor was home to a restaurant.

Officials said the number of casualties could rise.

According to the Jongno District Office, the building dates back to 1983 and was registered as an office building rather than a residence.

A joint field investigation by the fire and police departments is scheduled to take place on Saturday to pin-point the exact cause of the fire and if the alarm didn’t function, as Shim claimed.

“We will check to see if the fire detector installed in each room worked properly. We will make sure to secure CCTV footage to see if there are any indications of crime,” said police and fire department officials.

Police said that out of the seven dead, the youngest was a 35-year-old male.

Six of the seven are Korean while one was identified as a 53-year-old Japanese male.

“They were all hard-working people,” said the owner of the gosiwon as she watched her building burn. “I wish it could have been me instead of them.”