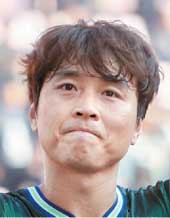 Lee made his 502nd K League appearance after playing full time in Jeonbuk’s 0-0 draw with Jeju at the Jeju World Cup Stadium in Seogwipo, Jeju Island. The 39-year-old striker, who made his pro debut with Pohang Steelers in 1998, now has one more league appearance than retired midfielder Kim Gi-dong, who played 501 matches from 1993 to 2011.

Lee is the all-time K League leading scorer with 215 goals. He has netted at least 10 goals per season since 2009.