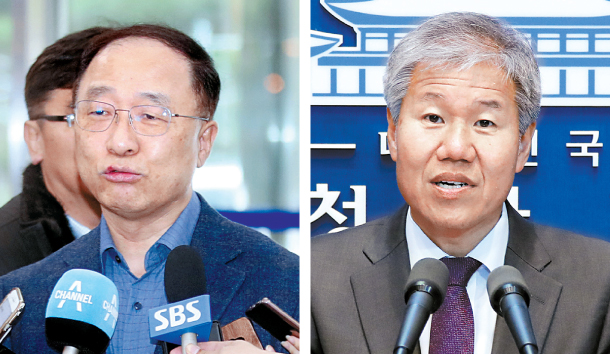 From left: Hong Nam-ki, the finance minister nominee, and Kim Soo-hyun, the president’s pick for chief of staff for policy. [YONHAP]

The new nominees for finance minister and presidential policy chief won’t get much time to settle into their new roles as a series of reports warn that the Korean economy has plunged into a downturn.

The initial remarks by Hong Nam-ki, the finance minister nominee, and Kim Soo-hyun, the president’s pick for chief of staff for policy, reflect that their broad policy direction will be built on the same income-led growth platform as their predecessors, but with a bit more flexibility.

“We need to adjust and substitute the income-led growth policy when unexpected problems arise, rather than arguing about [income-led growth],” Hong said late Friday after the Blue House made the announcement.

He vowed to support low-income earners and emerging high-tech businesses in line with President Moon Jae-in’s pledges, adding that top priorities in policy agenda will include improving people’s livelihoods and structural reforms including deregulation.

The president’s income-led growth initiative, a measure aimed at stimulating the economy by raising low-income wages, invited a backlash after the steep rise in the minimum wage was accused of putting a strain on employers and companies, leading to less hiring and investment.

“Income-led growth, fair competition and innovative growth are all entangled together like a package. There will be no revision in a major way,” Kim told reporters on Sunday.

Hong, however, admitted that the degree of the wage hike was too excessive, saying that he will work on adjusting the pace.

To stave off the image of a tense relationship between the finance minister and policy chief, the nominees pledged to work together as “one team.”

“I will serve and support the finance minister carefully, so that no one would speak of a ‘double tier leadership system for economy,’” Kim said.

In an assessment of the current economic situation, Hong noted that the Korean economy is growing below its potential growth rate, but denied that the current state is akin to a recession or crisis.

“It’s true that jobs data and investment are weak and the country is below its potential growth rate, but it is too early to say that Korea enters a financial recession,” he said. “Such difficulties won’t be solved quickly through next year.”

As noted by Hong, the country’s economic growth slowed in recent months. The economy grew 2 percent in the third quarter, according to the Bank of Korea. That’s the slowest growth since the third quarter of 2009, when it grew 0.9 percent year on year.

Major financial institutions are slashing their outlook for Korea on the basis of weak investment, tepid domestic demand and a sluggish jobs market.

Moody’s Investors Service, a global credit ratings firm, lowered its projection to 2.5 percent this year and 2.3 percent next year. The numbers are lower than other local institutions like the Bank of Korea and the Korea Development Institute’s 2.7 percent for this year.

The ratings agency mentioned that global economies will see a slowdown because of weakening trade affected by a trade dispute between the United States and China.

The two nominees will be confirmed after a National Assembly hearing.