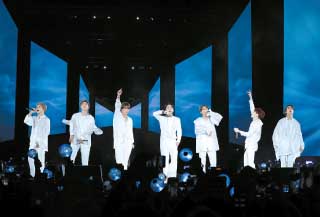 It’s getting difficult for BTS fans to see their favorite K-pop group on TV in Japan. Since the band’s appearance on TV Asahi last week was cancelled, one Japanese media company reported that other broadcasters are cancelling or delaying BTS TV appearances, according to JoongAng Ilbo.

Last week, TV Asahi argued that one member wearing a T-shirt depicting the U.S. atomic bombing of Hiroshima was the reason for the cancellation. It delivered the news to the group one day before the scheduled filming.

The T-shirt featured the words “Patriotism,” “Our history,” “Liberation” and “Korea” along with two photos - one depicting the Korean people’s celebration in 1945 of the liberation of Korea from Japanese colonial rule, and the other one depicting the atomic bombing of Hiroshima, after which Japan announced its surrender to the Allies on August 15.

Big Hit Entertainment, the group’s agency, said on its official Japanese fan page that the group wouldn’t be making an appearance as scheduled on TV Asahi. It did not mention the specific reason for the sudden change on its website.

While the TV appearances didn’t happen, the agency still confirmed the group’s tour in Japan, which starts Tuesday, will proceed as planned, according to media reports. BTS performs first in the Tokyo Dome on Tuesday and again on Wednesday before moving to other cities, such as Osaka, Nagoya and Fukuoka.

Tickets sold in advance for an upcoming documentary about the boy band’s ascent to global fame have passed the 100,000 mark as of Sunday.

According to data compiled by the Korean Film Council, “Burn the Stage,” set to be released Thursday in the domestic Korean market, ranked No.1 on the charts based on the ticket reservation rate. This was followed by “Bohemian Rhapsody” and “Fantastic Beasts: The Crimes of Grindelwald”.

The documentary features the septet’s “2017 BTS Live Trilogy Episode III: The Wings Tour,” which took the band to 19 global cities over 300 days.

The film was previously released on YouTube Premium, a paid streaming subscription service by YouTube, in a series of eight episodes from March to May.

It’s scheduled to get a worldwide theatrical release in 40 nations on Thursday. In Korea, it will be shown exclusively in cinemas operated by CGV.