A battle for clicks is raging in the online shopping world as November recently took over as the busiest shopping month of the year.

While it has traditionally been relatively quiet, as it’s wedged between Chuseok and the end-of-the-year holiday season, November has caught the imagination of Korean consumers as they are exposed to Black Friday in the United States and Singles’ Day, a celebration for single people, in China.

Online shopping malls have been pushing discounts in November and are drawing a strong response.

Earlier this month, WeMakePrice, an e-commerce company, introduced “Black 1111” day, in which a limited number of a product is offered at a heavy discount twice a day, at 11 in the morning and again later that night. 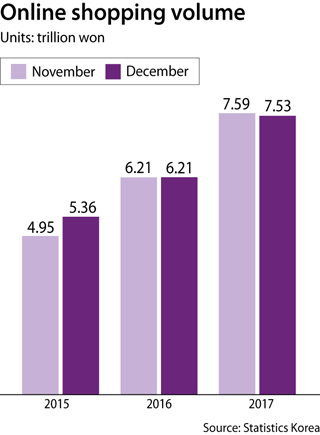 The response has been explosive. On Nov. 5, 130 cashmere coats sold in just 16 seconds, and 500 Apple AirPods in a minute and 38 seconds.

“We recorded around 48 billion won [$42.5 million] of sales on Nov. 1, our highest daily volume ever,” said Lee Seung-jin, an official at WeMakePrice.

Lee Jin-won, vice president of online commerce company TMON, explained that competition abroad has driven companies to fight for domestic demand, “We couldn’t just watch the demand being absorbed by other countries. The market has grown larger as companies that have been trying to recapture local consumers are competing with each other through sales promotions.”

E-commerce platforms such as Coupang, TMON and WeMakePrice are placing their bets on time-limited sales offers. The discount deals are offered for a wide range of products, from household appliances, such as refrigerators and washing machines, to coupons, movie tickets and restaurant gift cards.

Other online shopping companies have joined the competition this year, including 11street and eBay. 11Street is offering last year’s top 1,638 brands on discount. Meanwhile online shopping malls Gmarket and Auction, operated by eBay Korea, are placing discounts up to 70 percent on around 10 million products.

Department stores and large retail stores are also taking part in the new shopping season. Emart, which celebrates its 25th anniversary this year, launched its own version of Black Friday, titled “Black 25” until Nov. 28. Lotte Mart is selling hanwoo, or Korean beef, at a 40 percent discount, and elLotte, the online shopping mall for Lotte Department Store, is offering discounts of up to 60 percent on luxury brands such as Prada and Burberry.

Despite the surge in shopping demand in November, there are also concerns that the new online shopping frenzy may divert sales from physical stores.

“Increase in consumption during a stagnant spending season is good news,” said Park Ju-young, a professor who specializes in retail and marketing at Soongsil University. “But there are also concerns of a decrease in employment due to the contraction of physical stores, which employ more people than online shopping malls.”